Halsey Addresses Grammys Snub: 'It's Not Always About the Music or Quality or Culture'

Women ruled the 2021 Grammy nominations list that was unveiled on Tuesday, but there was a name noticeably missing: Halsey. After spending a few days to ruminate on yet another snub, the pop star took to Instagram stories to get some things off her chest.

“I’ve been thinking and wanted to choose my words carefully because a lot of people have extended sympathy and apology to me since the Grammy nominations,” she wrote. “The Grammys are an elusive process. It can often be about behind the scenes private performances, knowing the right people, campaigning through the grapevine, with the right handshake and ‘bribes’ that can be just ambiguous enough to pass as ‘not bribes.’”

If artists were able to manage any of these political tactics, Halsey also suggested having to commit “to exclusive TV performances and making sure you help the [Recording] Academy make their millions in advertising on the night of the show,” if you wanted your name on the list.

“It’s not always about the music or quality or culture,” she continued before giving a shout out to The Weeknd, who also got shut out and aired his grievances earlier this week. “While I am THRILLED for my talented friends who were recognized this year, I am hoping for more transparency or reform. But I’m sure this post will blacklist me anyway.”

Halsey released her third album, Manic, this year, and despite it going Platinum and its lead single “Without You” topping the charts, she wasn’t nominated for any Grammys. See her full response to the snub below. 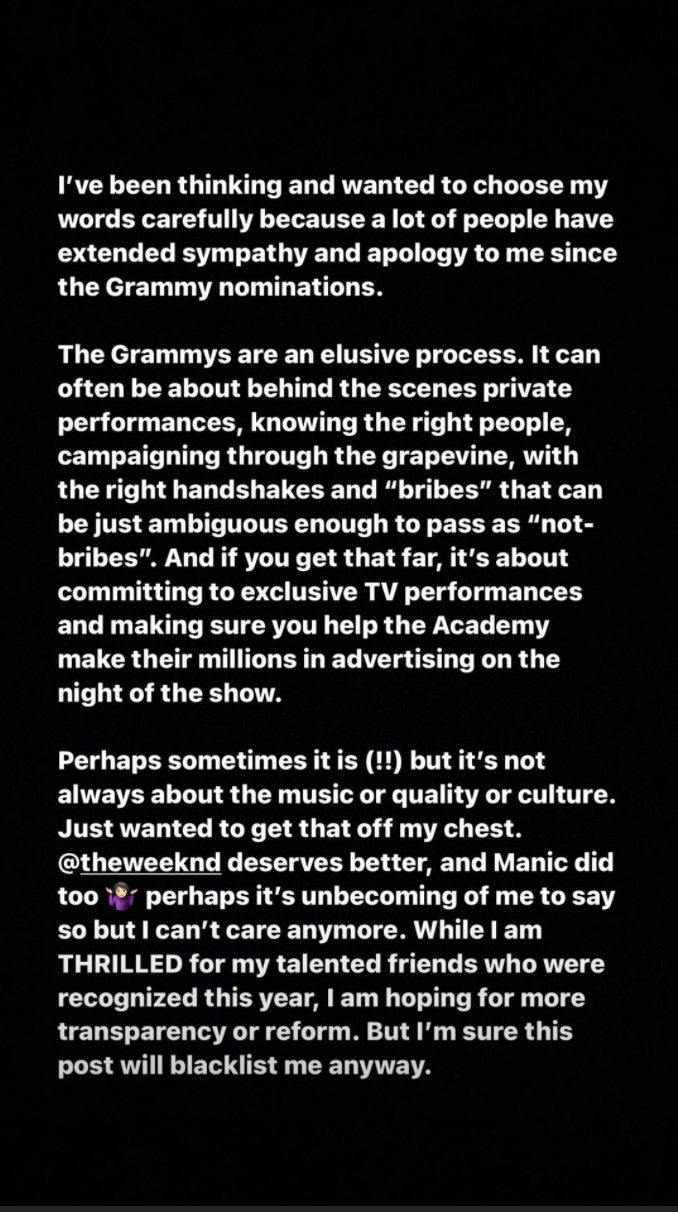 If you were waiting for Rage Against the Machine to collectively chime in with their take on the modern revival of old-fashioned racism (which has always been there, but is far more prevalent in society now than it was five years ago), your day has come. Arguably the most politically charged band of all time […]

At this point, there’s been so many printings, pressings and reissues of Nirvana’s 1989 debut Bleach that it’s nearly impossible to keep track of which is what and for collectors, worth how much. Just in time for Valentine’s Day, another version of the Sub Pop record (aka the album that started it all) will be issued as a […]