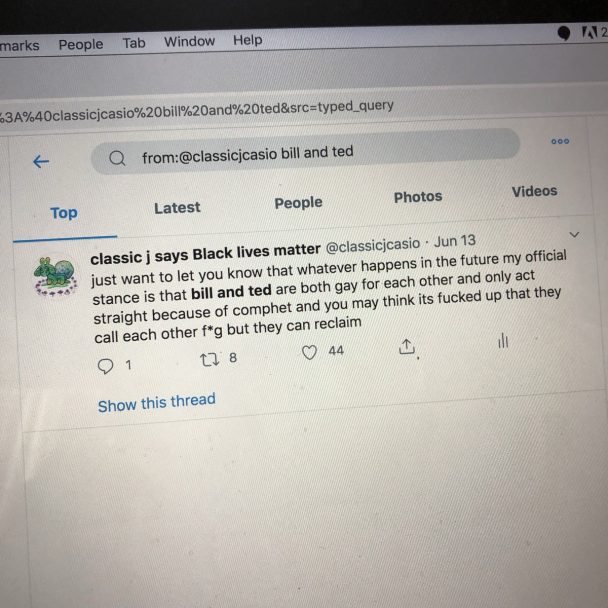 Glass Beach, the extremely online Los Angeles post-emo Band To Watch, haven’t released any new music since last year’s behemoth The First Glass Beach Album, which landed them on our most recent Best New Bands list and included one of our 100 favorite songs of 2019. That lack of new material ends today with the release of the suitably grandiose “Running.”

As Glass Beach’s record label Run For Cover explains on Twitter, “Running” was originally written for the upcoming Bill & Ted Face The Music, the long-awaited third installment of Alex Winter and Keanu Reeves’ gleefully absurd time-traveling, metaphysical rock ‘n’ roll film franchise. Now the song won’t be in the movie after all, so instead it’s up on Bandcamp. (The cover art is a tweet by Glass Beach mastermind J. McClendon speculating on Bill and Ted’s sexuality.)

“Running,” which you can buy for just $100, steers Glass Beach’s chiptune-adjacent emo epics toward the guitar-slinging ’80s rock fireworks celebrated by Bill and Ted via their garage band Wyld Stallyns. “When my heart is done I keep running to the setting sun,” Classic J sings. “I’m leaving looking for a meaning and nothing’ll make me stay.” It builds to a huge sing-along refrain: “When we get where we are, don’t forget where we’re from/ I know, it’s already gone/ Yeah, we’re coming up short, but just keep holding on to me/ We’re what we need.”