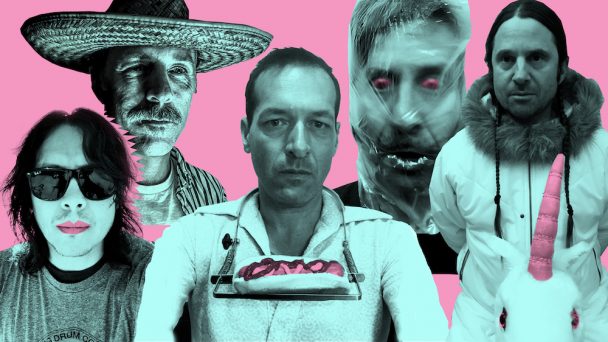 Anytime the convulsive Californian rock rippers Hot Snakes are in action, it’s good news. In 2000, Rick Froberg and John Reis formed Hot Snakes out of the ashes of their old band Drive Like Jehu. The band released three albums before breaking up in 2005. But two years ago, the reunited Hot Snakes released a fourth album called Jericho Sirens, and it ruled. Since then, Hot Snakes have released a few more singles, and those have ruled.

Late last year, when Hot Snakes toured the UK, they sold a tour-only 7″ single with two new songs. One of those songs was “Checkmate,” which went up online. The other was “Not In Time,” which did not, even though it’s probably a better song. “Not In Time” is an anthemic racket with a whole lot of riffage and with some urgent, feverish yelling from Froberg. Today, that song gets a music video, which means we get to hear it.

The video is a lot of fun, too. Director Jessica Kourkounis, sister of Hot Snakes drummer Jason, tells the story of grown-ass skaters who take Hot Snakes-branded blotter acid and they grow unnaturally long arms. This means we get to see them skate around looking all goofy — a small triumph of extremely cheap special effects. Check it out below.

Right now, Hot Snakes are in the midst of releasing a series of 7″ singles that’ll apparently lead up to their next album. They also dropped “I Shall Be Free” in February.