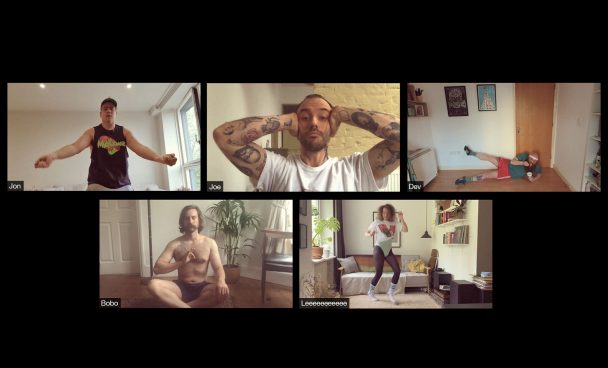 Two years ago, IDLES released their last album, Joy As An Act Of Resistance. The album was widely acclaimed, and deeply beloved. If you happened to catch any IDLES show across 2018 or 2019, you already know how fervent their fanbase had become, how intense their shows could get. It was clear that whatever they did next would be highly anticipated. And it sounds like we’re about to find out what it is that comes next.

Today, IDLES have shared a new song called “Mr. Motivator.” Along with the new track, Joe Talbot offered a preview of the band’s third album and how “Mr. Motivator” sets the stage:

We want to start this journey with a means to not only encapsulate the album’s sentiment, but to encourage our audience to dance like no one is watching and plough through these dark times with a two ton machete of a song and the most beautiful community of scumbags ever assembled. Let’s go. All is love.

Apparently “Mr. Motivator” has a bit of a tongue-in-cheek acknowledgment of the band’s tendency for sloganeering — Talbot keeps asking “How d’you like them clichés?” through the song. But the so-called clichés lead to some rather unique images: “Like Conor McGregor with a samurai sword on roller blades,” “Like Flava Flav in the club riding on the back of John Wayne,” and… “Like Kathleen Hanna with bear claws grabbing Trump by the pussy.” This is all delivered with the band’s customarily apocalyptic energy. Check it out below.