On "The Vampire," Susanna Turns Baudelaire's Poetry Into Haunting Balladry 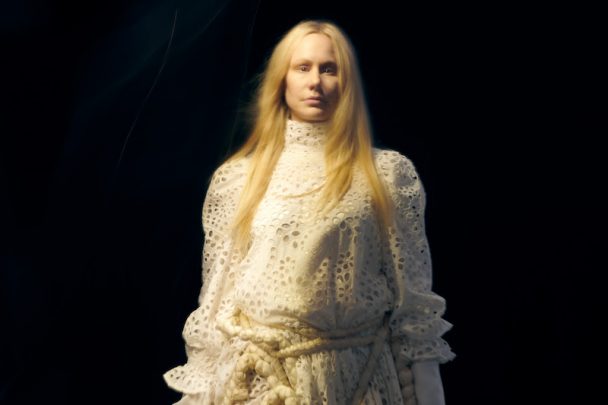 Norwegian balladeer Susanna Wallumrød specializes in melodrama hewn from folk and classical traditions, like Nico making an especially baroque form of chamber pop. We’ve often heard noteworthy covers from her, including takes on classics by Leonard Cohen and Joy Division, but she has no shortage of her own material; the day before she announced 2018’s Go Dig My Grave, Bonnie “Prince” Billy announced his own album of Susanna covers.

At week’s end she’ll release a new one called Baudelaire & Piano, and she’s teased it with one last advance track, a stunner called “The Vampire.” Like the other nine tracks on the album, it sets a poem from Charles Baudelaire’s The Flowers Of Evil to new original piano music. It’s the follow up to last year’s Garden Of Earthly Delights, on which Susanna and her band the Brotherhood Of Our Lady served up musical interpretations of Hieronymous Bosch paintings.

In a press release, Susanna writes about “Vampire” and its video by CLOAK/DAGGER:

“The Vampire” was one of six poems from Baudelaire’s masterpiece which was forbidden by law, and censored for being “obscene” in Paris in 1857. That is interesting in itself, but I was first and foremost struck by the intensity in the poem. The vampire is a strong image of being captured in an emotional, almost abusive, chaos. Carsten Aniksdal and Sølve Sæther has made a beautiful video from the forest, where the shadows make the light break through, even though vampires quite possible is lurking around. Aniksdal is also a part of the release concert performance at Henie Onstad Art Center with film and video material.

Baudelaire & Piano is out 9/11 on SusannaSonata.