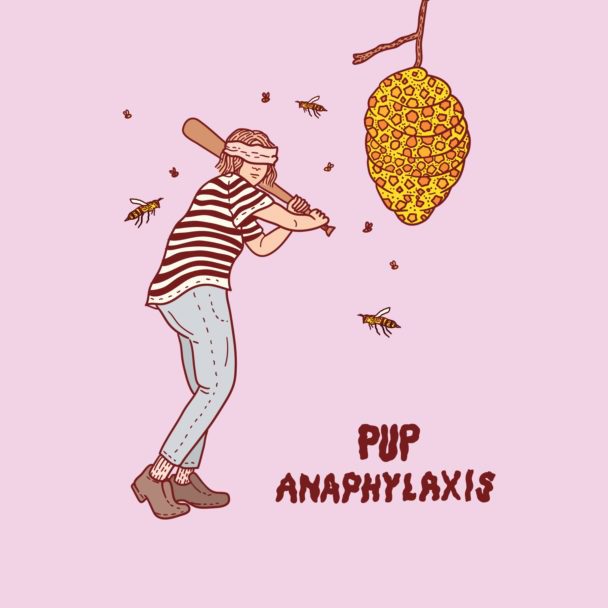 Although Stefan Babcock shared his remotely performed quarantine anthem “Waiting For Something To Happen” earlier this month, today’s new single “Anaphylaxis” is the first true PUP song to emerge since last year’s killer Morbid Stuff. It picks up where the last one left off, which is to say it’s another nerve-rackingly intense, sneakily funny, ultra-catchy pop-punk ripper. This band continues to be riotous in multiple capacities.

In a statement, Babcock explains the new song’s alternately humorous and horrifying genesis:

I got the idea for the song when I was at my partner’s cottage and her cousin got stung by a bee and his whole head started to swell up. His wife, although she was concerned, also thought it was pretty hilarious and started making fun of him even as they were headed to the hospital. He ended up being totally fine, but it was just funny to watch him freaking out and her just lighting him up at the same time. It reminded me of all the times I’ve started panicking for whatever reason and was convinced I was dying and the world was ending and no one would take me seriously. In retrospect, I always find those overreactions pretty funny. So we wrote a goofy song about being a hypochondriac and tried to make our guitars sound like bees at the beginning of it.

“Anaphylaxis” is out now on Rise Records.