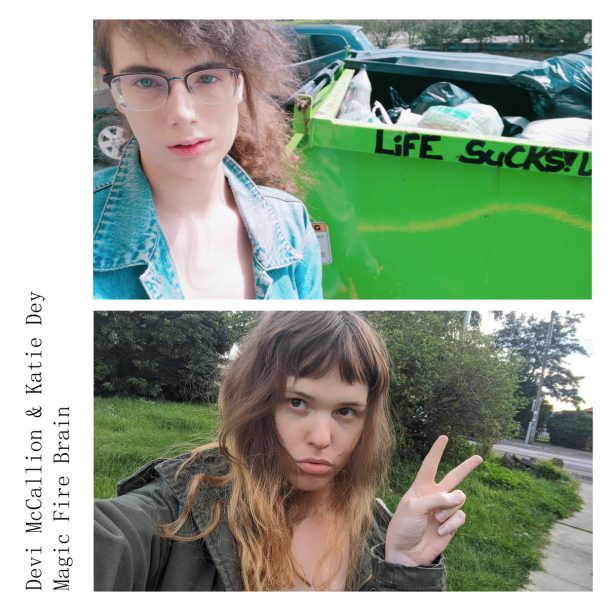 A couple years ago, Devi McCallion and Katie Dey released a collaborative album called Some New Form Of Life. Since then, they’ve put out plenty of material on their own — McCallion has released a couple of Black Dresses albums and one Girls Rituals album, and Katie Dey has released solipsisters and mydata, which we named Album Of The Week when it came out this past July. Now they’ve teamed up again for a new full-length called Magic Fire Brain, which they dropped today all at once.

Recorded over the last few months, it’s consistently surprising and joyfully sad, a collection of vulnerable and invincible jams that’s pretty and pillowy and always urgent. The back half of the album is filled with heavy hitters. “Circumstances” is transcendent and heart-racing, the title track is wrenching and determined, built on a repeated refrain of “I got this.” On “Open Heart,” McCallion’s delivery is raw: “I know it’ll never come/ But I wait for a loving heart/ A loving world.” And it all ends on the throbbing “Milk,” an abrasive payoff that explodes all of the album’s complicated emotional quandaries into a feverish and cathartic repetition of “magic fire brain.”

As with everything they do, it’s a whole lot to take in but it’s uniformly excellent. “Piano ballads and slow jams for whatever happens after,” is how Dey framed it on Twitter. Listen to the album and check out a video for “Mirror” below.

Magic Fire Brain is out now.