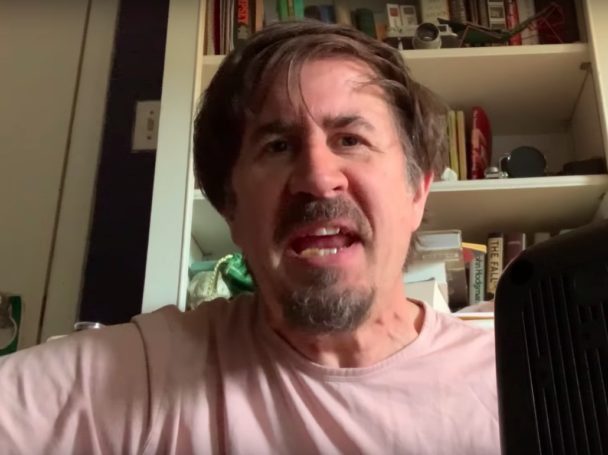 The Mountain Goats has been a full-on band for many years, but the project started out as just John Darnielle recording blood-and-fire acoustic songs into his Panasonic boombox. Thanks to the whole global-pandemic thing currently happening, that iteration of the Mountain Goats appears to be returning. This month, Darnielle has been hinting at the impending presence of a new old-school Mountain Goats tape, and he’s shared videos of himself rocking a quarantine goatee and bashing out the new songs “For The Snakes” and “Exegetic Chains” fully solo. Yesterday, he dropped another new one.

“Until Olympius Returns,” Darnielle’s latest, is an old-school Mountain Goats banger. It’s Darnielle thrashing at his guitar, singing in the declarative bray that he rarely uses anymore, and getting the wild look in his eye that you sometime see onstage. (It’s a good night when Darnielle gets that look.) If you’ve ever been to any kind of recording session, you know that it is a deadly boring process. But when it’s just Darnielle hitting record on his boombox and going nuts, it’s bewitching.

According to Darnielle, the Olympius of the title is “a Neoplatonist in Alexandria who fled when the Serapeum fell under siege. He vanished into Italy and was not heard from again.” “Until Olympius Returns” is written from the perspective of people in a terrifying and repressive ancient society: “Behold the temple where the Old Ones stood/ Is it not a thing of beauty? Don’t it make you feel good?/ Is it not a big improvement on the way things used to be?/ Is it not a stately beacon for the whole world to see?” It rules. Watch it below.

There are still no details on this new Mountain Goats project, but it seems like it’s coming.