In the years since he moved from Ohio to Texas and went solo, former Black Swans leader Jerry David DeCicca has fashioned himself in the lineage of the singer-songwriters he so reveres, ranging from titanic figures like Townes Van Zandt and Bob Dylan (whose new album Decicca recently “reviewed” in entertaining fashion) to the many cult favorites he’s produced late-career albums for, the likes of Chris Gantry, Elyse Weinberg, and the late Larry Jon Wilson. On one hand, DeCicca fits comfortably into this seemingly endless continuum of slightly askew salt-of-the-earth troubadours. On the other hand, there is truly no one like Jerry David DeCicca.

Following a pair of 2018 albums called Time The Teacher and Burning Daylight, DeCicca has applied his unique perspective and unmistakable voice to a new set of songs called The Unlikely Optimist And His Domestic Adventures. Billed as “an anti-Hallmark ode to Positivity,” it features an extensive cast of characters including Augie Meyers of the Sir Douglas Quintet and the Texas Tornados, Ralph White of Bad Livers, Frank “The Wild Jalapeño” Rodarte, Scrawl’s Jovan Karcic, DeCicca’s partner Eve Searls, his former Black Swans bandmate Canaan Faulkner, and his buddy Don Cento. Essentially it brings together a deep lineage of significant Austin and Columbus musicians, as only DeCicca could.

“My whole life, I’ve struggled with anxiety and depression,” DeCicca writes in a statement accompanying the LP. “But through music, people who love me, and meaningful work, I’ve gathered enough light to keep getting out of bed. And, in my own way, I’ve become a more positive person and I feel very lucky for that.” The Unlikely Optimist’s tracklist offers some intriguing refreshment-related titles including “Country Cookie,” “Grape Jelly,” and “Coffee Black” (continuing the lineage of “Watermelon“) as well as some Lone Star State-specific offerings such as “Texas Toad” and “West Texas Trilogy.”

Opening track “I See Horizons,” out today, features DeCicca’s signature dulled and stubbly narration backed by thudding rhythm, sharply slicing electric guitar, and lively saxophone blurts. It’s a great entry point into the man’s catalog and will greet you like an old friend if you’re already familiar with his work. Listen below.

The Unlikely Optimist And His Domestic Adventures is out 10/16. Pre-order it here. 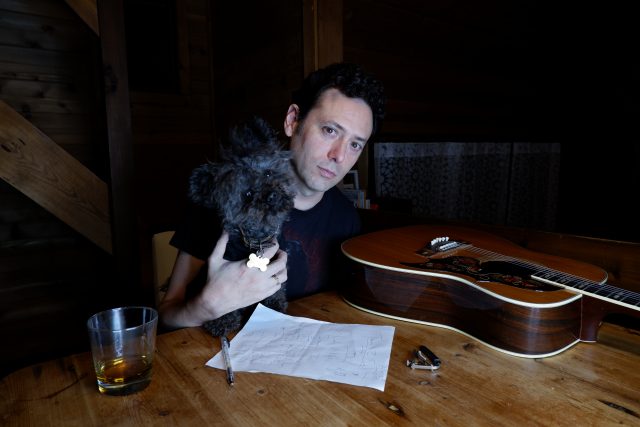