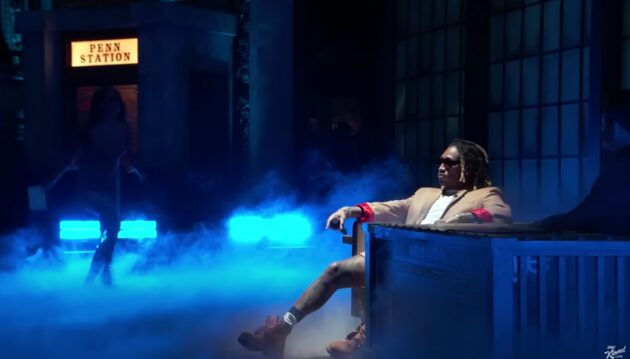 Future brought a fanciful performance of “Love You Better” on Wednesday as the musical guest on Jimmy Kimmel Live!

The performance begins with Jimmy bringing the Future out for what appeared to be for an interview. “So how is the future, relatively speaking?” asked the host, before the rapper replied, “I be drifting off sometimes.” The clip segues backstage with a woman reading a note left by Future before she dozes off. Future remains in the guest chair on a Penn Station set full of smoke for his hypnotic performances before the woman awakens and takes him away.

The song is lifted off Future’s I Never Liked You album, which debuted at No. 1 and features guests Drake, Kanye West, Tems, Young Thug, Gunna, Lil Baby, Lil Durk, Kodak Black, and more.