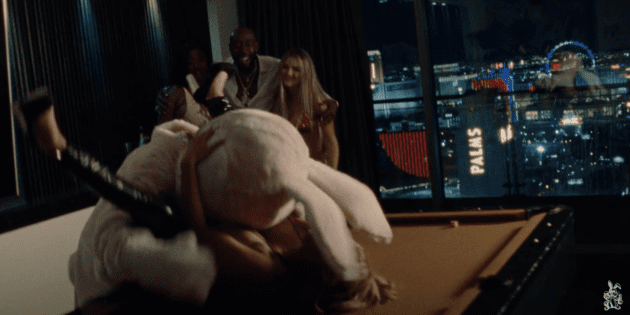 Coming off the heals of his SSS album, Freddie Gibbs brings his antics to Vegas in the project’s latest music video.

Landing in the Vegas desert from outer space, the Nick Walker-directed clip follows Freddie Gordy and his rabbit mascot crashing a wedding at the Mon Bel Ami Chapel. There, they take the bride and her top-less bridesmaids through Sin City and back to the hotel, before Freddie awakens and realizes he is the rabbit.

“Skinny Suge Knight, I put that on my mama, ho,” he raps over the spacey beat by Boi-1da, Jahaan Sweet, and Roget Chahayed. “Dripping that ice, how you robbers gon’ rob the robber, ho? / Space Kane, space age pimpin’, MJ and Ball and them / Insane, one way gang, I’m with the mob and them.”