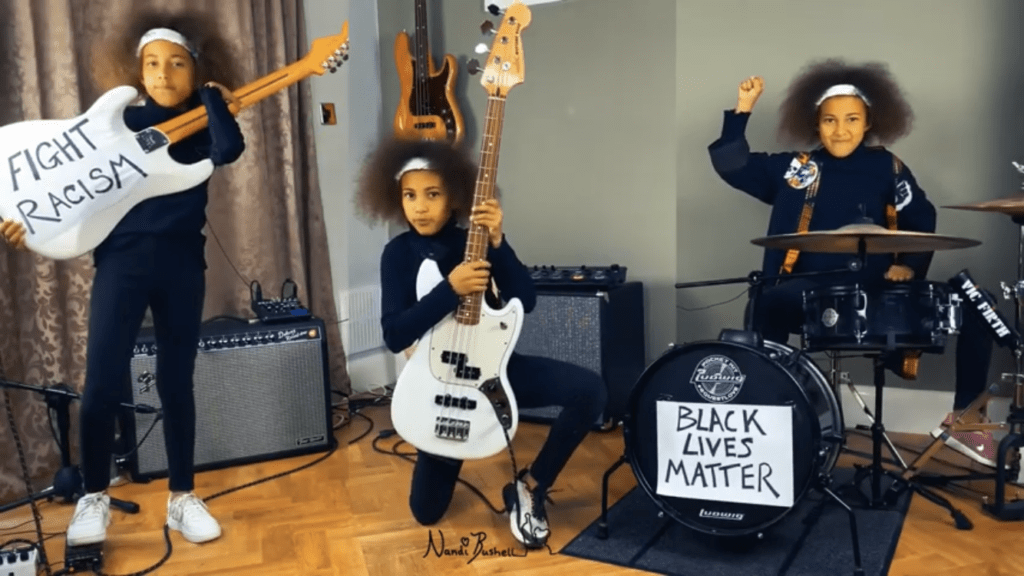 Musicians from across the country are doing their part to protest police brutality and racism this week and, in the process, they’re inspiring a lot of young people to do the same.

Multi-instrumentalist Nandi Bushell, the 10-year-old, one-kid band, posted an electrifying cover of Rage Against the Machine’s “Guerrilla Radio” on Monday in support of the Black Lives Matter movement, as she jammed out on three different instruments with a BLM sign taped to her drum kit.

The sign of solidarity, coupled with her love of RATM, has gotten attention on Twitter, as the young drummer extraordinaire has earned nearly 6,000 likes as of Monday afternoon. RATM’s guitarist Tom Morello even shared Bushell’s tweet, writing “Well now we are on the right track.”

Well now we are on the right track https://t.co/R0J2rV8Mgz

Bushell’s videos have had millions of views since her first post three years ago and she’s even appeared on the Ellen Show in December. But this might be her most powerful performance to date.

A number of musicians have taken part in the protests that have taken place across the country in recent days. Fiona Apple went to Santa Monica to show her support while Jay-Z reached out to Minnesota Gov. Tim Walz over the weekend about the Floyd situation, saying that he seeks justice for him. On Saturday, Halsey was hit by rubber bullets and shrapnel during a protest in Los Angeles. Killer Mike delivered an impassioned plea to protestors in Atlanta to not burn down their own houses in anger on Friday. Lorde also shared a letter to her fans expressing support for Black Lives Matter.

Check out Bushell’s RATM cover below.

Robby Vee, also known as “The Prince Of Twang,” has released two new tracks. Titled “Good Morning” and “A Forever Kind of Love,” the two tracks perfectly depict his talents and skills as an artist. Robert Velline is a rock-n-roll fable and a veteran in the industry. His knack to create feel-good tunes has made […]

Foo Fighters released Hail Satin, their split Bee Gees cover album/Medicine at Midnight live songs (which you can read our review of here). Record Store Day album last weekend. The collection, unsurprisingly, is quite popular and is fetching hundreds of dollars for the wax version. Even though it’s also on Spotify, it hasn’t stopped the newly-christened Dee Gees […]

Billy Corgan of the Smashing Pumpkins took to Instagram today to announce the upcoming arrival of their newest live vinyl, Live at the Viper Room 1998. “The thing you hear in the Viper Room show is you’re really sort of being allowed into the studio where the songs don’t have the accouterment of all the […]