How a 'Woodstock' on Wheels Fizzled Into a Free-Love Failure

Woodstock wasn’t supposed to be a hit. So when the 1970 concert film-cum-documentary exploded across screens, engrossing everyone who’d either been at Woodstock or just claimed they had, Warner Bros. began a desperate race to make a copycat cash-in. Enter The Medicine Ball Caravan.

The Grateful Dead were supposed to topline a massive road trip like the one Ken Kesey and his Merry Pranksters had embarked on a few years before — this time with a French camera crew along for the ride. The plan was for the hippies to groove across American to Van Morrison, Joni Mitchell, and Hot Tuna — and freak out with Alice Cooper.

Free drugs would lubricate shocking antics for what the producers hoped would be a Woodstock on Wheels. Academy Award-winning documentarian Francois Reichenbach would capture the hippies in all their dippy glory. 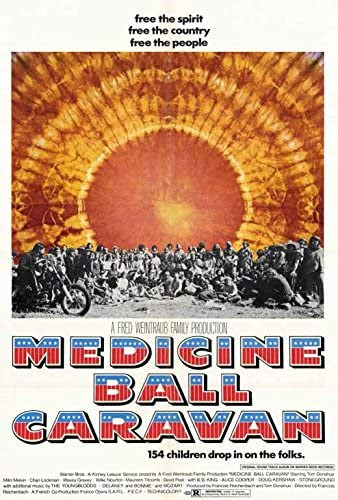 But nothing went as planned. No Dead, no electric Kool-Aid acid tests, no square local townspeople who would be shocked and outraged by half-naked flower children writhing in all their free-love glory through the mud pits of the Midwest.

In fact, the townspeople turned out to be respectful and cool, and the hippies, perfectly nice.

Dan Delgado tells the richly entertaining story of the free-love explosion that fizzled on the latest episode of his The Industry podcast, which you can listen to on Apple or Spotify or above.

Smooth, pleasant road trips don’t make for great movies, as the Medicine Ball Caravan unfortunately proves. Which may explain why millions of boomers can either regale you with tales of Woodstock, or how they almost went — but almost no one talks about the Medicine Ball Caravan. Delgado finds a few people who will, including a woman who earned her place by winning a hippie beauty contest.

On every episode of The Industry, Delgado highlights Hollywood’s weirdest decisions, biggest disasters, and occasional miracles. In the past, he’s covered stories like how Christopher Reeve got reluctantly lured into making Superman IV — and launched Morgan Freeman’s career in the process. (Let me save you a Google: Morgan Freeman is not in Superman IV.)

Woodstock may have made $50 million at the box office, but The Medicine Ball Caravan, which its pseudo-spiritual name and hippiesploitation manifest, is mostly forgotten — until now.

Eminem premiered his “Higher” video on Saturday, ahead of the UFC 257: Poirier vs. McGregor 2 event. The black-and-white clip shows Shady preparing to fight his demons (literally), and is interspersed with real UFC footage. ESPN’s Michael Eaves and UFC chief Dana White make cameos midway through, during a mock interview with the rapper ahead of his […]

They officially pulled it off. On Friday night, the Flaming Lips successfully performed the first of two space bubble concerts at Oklahoma City’s The Criterion after postponing the original dates due to rising COVID-19 numbers. The venue’s floor was filled with 100 bubbles, which could fit up to three people each, and every member of […]

During his last night in office, Donald Trump granted clemency to a handful of notable inmates, including Kodak Black. Shortly after his release, the rapper tweeted thanks to the former president. “I Want To Thank The President @RealDonaldTrump For His Commitment To Justice Reform And Shortening My Sentence,” he wrote. “I Also Want To Thank […]