Watch Bono and the Edge Cover 'Stairway to Heaven' 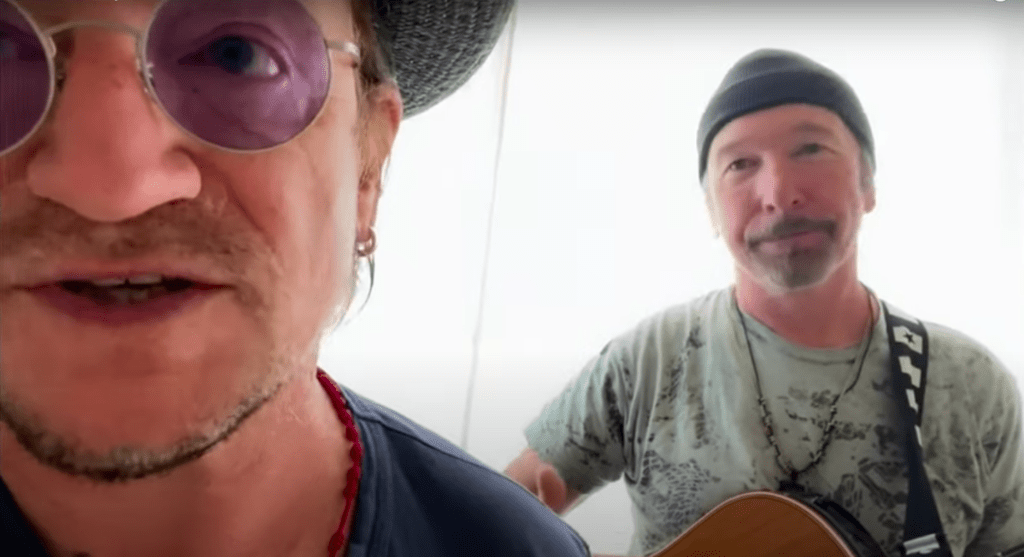 On Sunday, St. Vincent shared a video of herself “fumbling through” a cover of Led Zeppelin’s “Stairway to Heaven.” But she wasn’t the only one inspired to tackle the 1971 rock classic.

U2’s Bono and the Edge also posted a video cover of “Stairway,” a song they’ve played four times on tour, to salute their road crew.

“There’s one annoying aspect of an Irish crew that has to be said,” Bono says in the clip. “Wherever you go in the world, whatever venue you’re playing — whether it’s the Olympia or 3 Arena or Madison Square Garden — you walk into the venue and it’s a big moment, and you’ll hear a song that we said, ‘We’ll never, ever play this.’ And that’s right, ‘Stairway To Heaven.’ These professionals believe they play this better than the band. And you know, it might be true.”

U2 has kept a low profile since 2018’s Songs of Experience. Bono turned 60 earlier this year and shared a playlist to coincide with the big day. Also, he released a new song from quarantine in honor of Italians who were going through a rough time due to the COVID-19 pandemic.

Watch Bono and the Edge perform “Stairway to Heaven” below.

Rage Against the Machine guitarist/activist Tom Morello is usually a man of many words but in a response to a Twitter user who accused him of “white man privilege” on Wednesday, he gave a simple answer to the accusation. His reply? “I’m not white.” The guitarist sent the message to Twitter user @TheRealNubian2, who had criticized […]

Yoko Ono Lennon will celebrate 50 years of the John Lennon/Plastic Ono Band — a record Lennon described as “the best thing I’ve ever done” — with the release of a massive eight-disc super-deluxe box set. The 159-track, 11-hour collection, which boasts 87 never-before-heard recordings, arrives April 16 via and Capitol/UMe. The ultimate mix of “Mother” launches the album as […]

Metallica celebrated their groundbreaking Master Of Puppets record on the LP’s 35th birthday by performing its epic opening track, “Battery,” on The Late Show With Stephen Colbert on March 3. When Colbert introduced the song, he noted that Master of Puppets had “such an impact that it was added to National Recording Registry of the Library of Congress.” […]