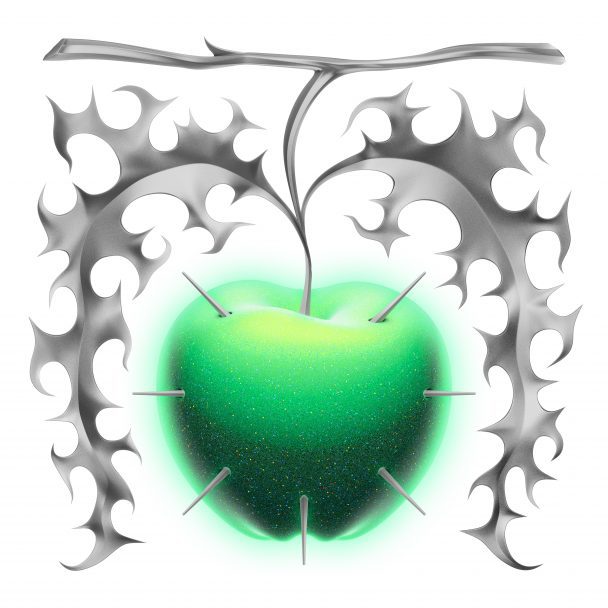 Only a month after his massive 49-track septuple album 7G, producer and PC Music head honcho A. G. Cook is already getting ready to follow it up with a new, slightly more bite-sized LP called Apple. “Apple is my own take on Personal Computer Music,” Cook explains in a statement. “I’ve always been interested in the blurred line between bedroom and professional studio production, and at what point a personality either gets created or accidentally takes shape.”

“For me there’s a great sense of freedom in combining something slick with something naive — a reality where anything could happen,” Cook continues. “In calling the album Apple, I wanted to draw attention to one of the simplest, most everyday objects, which somehow contains references to almost everything imaginable — from computers to The Beatles, New York to Snow White, and an entire world of history and mythology. A little free advertising doesn’t hurt.”

Cook introduced the record last month with the Shania Twain-inspired lead single “Oh Yeah.” Second single “Xxoplex,” which Cook describes as the “dark, industrial heart” of the album, eschews the guitar strums and melodic vocals in favor of strobing synths. “As I’ve spent more time with the track over the years, I’ve started to enjoy its softer side, a silliness, a sense that anything could happen,” Cook says. “As Newton’s law of EDM gravitation states, every track is bound to drop at some point.”

Along with the release of “Xxoplex,” Cook is also announcing Appleville, a virtual livestream event on 9/12 featuring performances from Cook, Charli XCX, 100 gecs, Clairo, and more. It’ll be free and open to all, but a Golden Ticket purchased from Bandcamp will give you acess to the “moshpit” along with recordings of the concert and other exclusive music, including Caroline Polachek’s remix of “Oh Yeah.” All proceeds from Appleville will be donated to Mermaids and Black Cultural Archives.