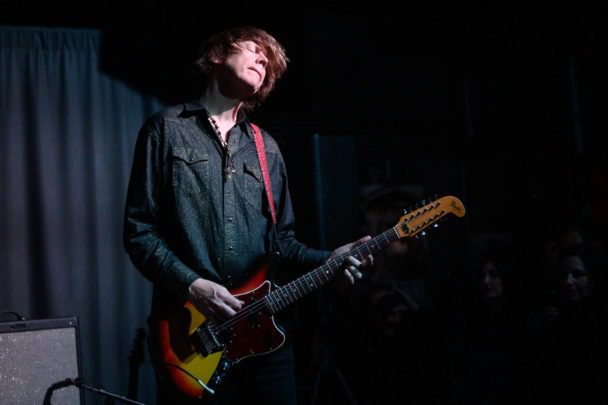 In the wake of Sonic Youth’s dissolution, Thurston Moore started a new band called Chelsea Light Moving. That lasted a couple years, and since then Moore has mostly shown up under his own name. But, in these unpredictable times we are living through, now there is one more surprise. Moore has resurfaced with a new Chelsea Light Moving song.

Well, sort of. The track in question is “Sunday Stage,” and though it was never released during Chelsea Light Moving’s tenure, it was recorded back in 2014, and the band had played it live. Moore left a comment on Bandcamp accompanying the song:

It’s Sunday 29 March 2020 and we are all on the same page in our shelters if we are so lucky with food and drink if so blessed and with a loved one or two or three if the gods are really shining — maybe they are — i always feel they are, even in the worst of times – faith is key — religion is what you want for your own devotion to being here and now and today i love rock n roll “do you love rock n’ roll” ” i do — and i love you” the resonant response of the Earth. We are fighting for each other hopefully with dignity despite the horror shows abounding in the hospices where brave soldiers save lives as much as they can – we salute you with loud love and raised guitars. it is time to pray to overthrow the weak governance of merchants of greed, insurrection blowing wild from the amplifiers, our hearts held in Sunday service.

Check out “Sunday Stage” below.

UPDATE: Moore has shared another album outtake called “No Go.” “With the contemporary malaise of thinking for one’s self in the face of crisis and responsibility beyond the concerns and anxiety of ego where signals jam and permissions are crossed with liberation and with sonic meditation you follow your heart,” reads the song’s description on Bandcamp. “Punk Rock is all about having loud pulse pounding fun and fighting for yr rights while looking out for each other in the pit. NO(W) GO!!!!!!!”