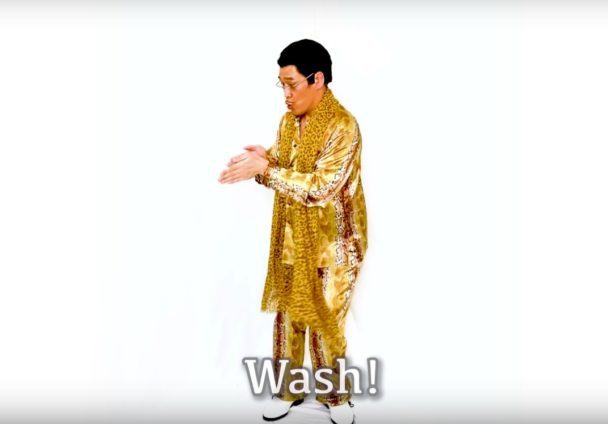 In 2016, a truly brain-numbing viral video earned a weird little historical-footnote status. Piko-Taro — the suave and mustachioed pop-musician alter-ego of the Japanese comedian Kazuhito Kosaka — came out with an utterly ridiculous 45-second synthpop ditty called “PPAP (Pen-Pineapple-Apple-Pen).” Thanks in part to a Justin Bieber tweet, the song peaked at #77 on the Billboard Hot 100, thus becoming the shortest song ever to make the American singles chart. This past weekend, Piko-Taro returned with… helpful pandemic advice?

On the new track “PPAP-2020,” Piko-Taro has adapted his own “PPAP” track, turning it into an insane and repetitive hand-washing anthem. If there are still people on the planet who need to be reminded to wash hands at this point, perhaps this will drill the point into their brains. For everyone else, it’s the kind of thing that threatens to linger in our brains for many, many years.

This is not the first time that “Piko-Taro” has used “PPAP” for the greater good. In 2017, he turned it into “SDGs” — as in, “Sustainable Development Goals.” This is the first time he’s done it in the middle of a crisis, though. Experience it below.

Japan has been doing relatively well with the COVID-19 pandemic, but thanks to a recent spike in cases, Shinzo Abe is reportedly about to declare a state of emergency. Wash wash wash.