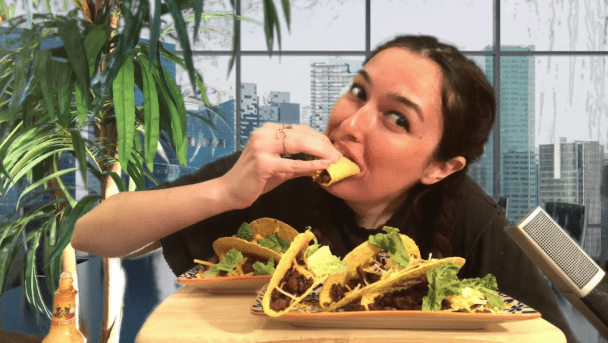 Cults singer Madeline Follin is part of the new supergroup Club Intl with Johnny Jewel and others, but we haven’t heard from her main band since they released an album-length cover of the Motels’ self-titled debut in 2018. Their last album of originals was 2017’s Offering. They seem ready to launch a new album cycle, though, judging from the new single and video they shared today.

“Spit You Out” is the first song Follin cowrote and co-produced with bandmate Brian Oblivion. Shane Stoneback and John Congleton were also involved. Musically, it boasts a haunting high-pitch melody reminiscent of Radiohead’s “No Surprises,” a hard-hitting effervescent drum beat, and an array of synth sounds that split the difference between Nine Inch Nails and My Bloody Valentine. Yet it feels much lighter and airier than those references imply. “Break the bond,” Follin repeats. “I’m so glad you’re gone.”

The song arrives with a memorable video that makes the most of the lockdown situation that has derailed most video production this year. It’s set up to look like a Mukbang/ASMR video, with Follin trying and spitting out various foods in front of default Zoom backgrounds. It’s funny, and the song slaps, so please enjoy.

“Spit You Out” is out now on Sinderlyn.