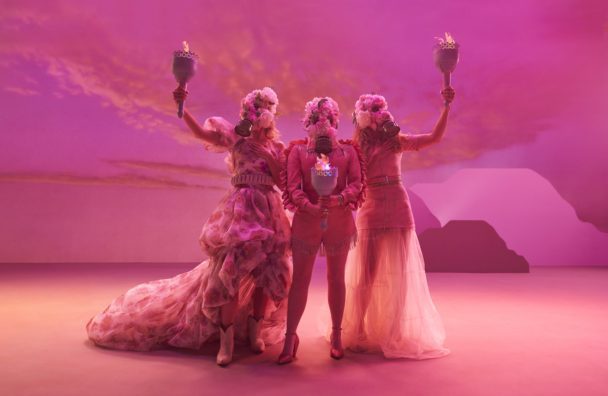 Gaslighter, the long-awaited Dixie Chicks comeback LP, is one many albums initially scheduled for spring release that have been pushed back indefinitely while the world at large — and the music industry in particular — adjusts to coronavirus. The trio came back strong with the title track in early March, but that’s all we’ve heard from the album so far. Now, with the original 5/1 release date looming tomorrow, the group has revealed a second advance track.

This latest offering from the Jack Antonoff-produced set is called “Julianna Calm Down.” Named for Emily Strayer’s daughter, it’s a message to a young women about how to persevere when a romantic relationship takes a dark turn, which fits within the album’s theme. (Like Car Seat Headrest, the Chicks were wearing gas masks in their promo photos even before the pandemic came around — presumably because it protects them from being gaslighted.) “Don’t give him the satisfaction that you can’t handle it,” Natalie Maines sings, while also advising her listener to “Put on your best shoes, and strut the fuck around like you’ve got nothing to lose.”

For now, the only place you can hear “Julianna Calm Down” is on Instagram, so listen to it that way below.

Someday, Gaslighter will be out on Columbia records. Until then, if you must leave home, stick to wide open spaces.