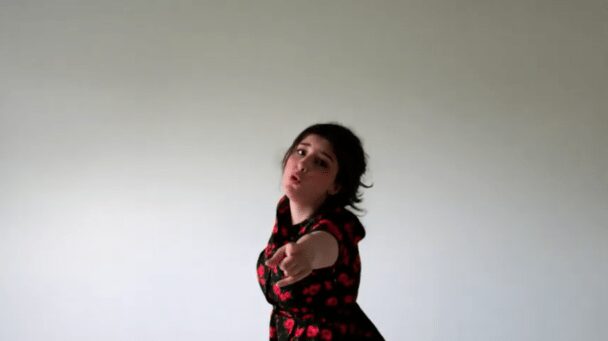 London singer-songwriter Eve Owen has spent the past few months rolling out singles from her debut album Don’t Let The Ink Dry, produced by the National’s Aaron Dessner and set for release this spring via his and Justin Vernon’s 37d03d label. First there was a lovely piano ballad called “She Says,” then a low-key folk-rock track called “So Still For You,” which was also lovely. And now she’s unveiled a third single from the album, and — you guessed it — this thing is just lovely.

“Blue Moon” amounts to just Owen’s smoky voice, an electric guitar, and some strings that work their way into the mix as the drama builds. That’s all it needs to amaze. With a melody and overall vibe that remind me of Sharon Van Etten and early Radiohead, she sings, “Oh, I’ll never let you break/ I’ll clean up your mistakes!” In a statement, Owen explains:

“Blue Moon” is about unrequited love, but not the hurtful kind. It’s when you love someone so dearly that even if they turn out to be just a friend, you’re grateful. It’s just about being endeared by someone’s mere existence, nothing more nothing less. I think when you take it upon yourself to truly accept unrequited love and still keep it, is when you’re finally becoming stronger again. It was the first time I ever sang with electric guitar as opposed to acoustic, and I think Aaron captured that curiosity and excitement of mine really delicately. We wanted to capture some sort of Stevie Nicks atmosphere where I was vocally more free and spontaneous.

Like the prior singles, “Blue Moon” arrives with a video by Owen’s sister, Hannah Owen. The director has a statement of her own:

We wanted to scrapbook together moments from Eve’s life, to look at what her journey has been so far. I think that in a way, Eve’s music is about conversation, it’s her way of talking to herself. And in this video we wanted to push that idea further. What would it look like if Eve was dancing with her younger self? What would it look like if they were communicating with each other? “Blue Moon” has a really raw and soulful sound. I just followed the simplicity and the power of the song, and experimented with how to echo that in the visuals.

Watch below, where you can also catch up on the previous Don’t Let The Ink Dry singles.