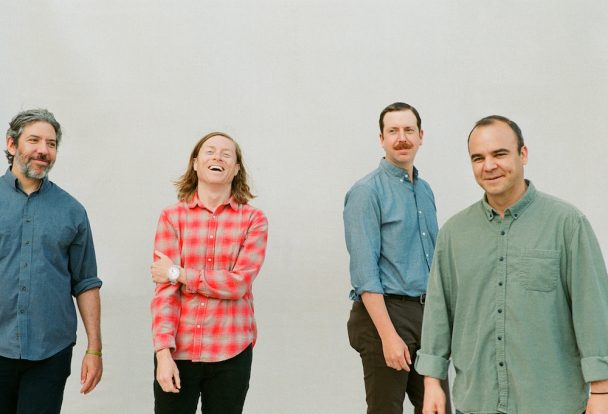 Future Islands’ last album, The Far Field, came out a little over three years ago. In the interim, the band never strayed too far from view; last year, for example, Samuel T. Herring made his official full-length debut under his rap moniker Hemlock Ernst, and just a couple weeks ago bassist William Cashion released a solo ambient collection. At the end of 2019, we started to get hints that a follow-up was on the horizon — at a show in Northampton, the group debuted a whole seven new songs. Still, it’s been a good long while since Future Islands properly released a new track. That changes today.

The idiosyncratic synth-pop greats have returned with a new single called “For Sure.” They wrote and recorded it in their hometown of Baltimore, and in another nod to their early day origins the song features backup vocals from Wye Oak’s Jenn Wasner. (This isn’t the first time Wasner’s appeared on a Future Islands track: She also sang on “The Great Fire” on 2011’s On The Water.) That’s not the only personnel note about “For Sure” — as you might’ve noticed from that new press shot up above, longtime touring drummer Mike Lowry is now an official fourth member of Future Islands.

As far as what you might want the first new Future Islands song in years to sound like, “For Sure” pretty much fits the bill perfectly. They’re still striking that same balance between their pristine synth sounds and Herring’s rough-hewn vocals. They’re still able to write tight, punchy verses and blow the whole thing up into a big, anthemic chorus. It’s good to have them back.

“For Sure” also comes with a video created by Sam Mason, depicting a long drive through post-apocalyptic wastelands. Check it out below.