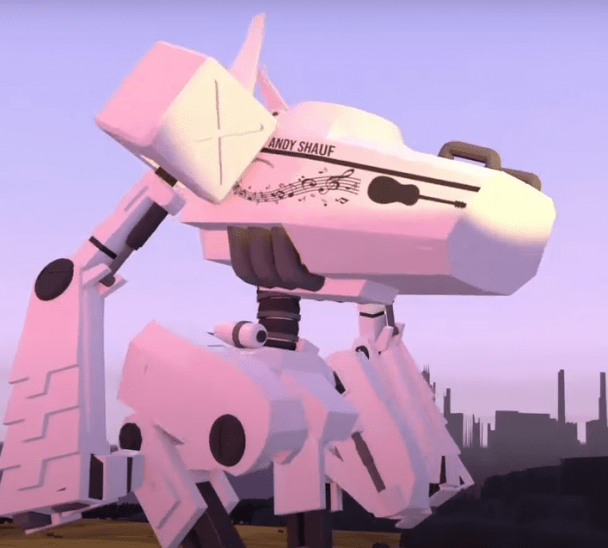 Back in January, Andy Shauf released his great new album The Neon Skyline. We named it Album Of The Week and it made our list of the best albums of 2020 so far. And since then, Shauf’s kept little bits of new music coming, a couple last words from the world of Neon Skyline. Starting with “You Slipped Away,” and then continuing with “Judy” and “Jeremy’s Wedding” just a couple weeks ago, Shauf’s been sharing leftover songs from the Neon Skyline sessions that were cut when they didn’t fit the album’s narrative anymore. Today, Shauf is back once more but it’s for something… rather different.

So much of the buzz surrounding The Neon Skyline focused on Shauf as a gifted storyteller. Appropriately, he’s gone and covered another great storyteller, Bruce Springsteen. He’s also chosen something of a standard and one of Springsteen’s best songs in “Dancing In The Dark.” Perhaps more unexpectedly, he’s done this as a part of the virtual talk show The Polar Express, which is set on a spaceship. As such, Shauf gets a pretty unique introduction: “We are going to have an encounter with a musical guest. He is of course the most emotionally powerful person in the universe — multi-talented singer-songwriter and award-winning artist, who is also piloting a giant robot, Andy Shauf!” I mean, how can Kimmel or CBS This Morning compete with that.

From there, Shauf’s cover of “Dancing In The Dark” plays out over a bunch of 3D animation of a robot battling a UFO across the cosmos. Musically, it’s slowed down and partially fits alongside the aesthetic of Neon Skyline, with perhaps a bit more of a bedroom pop synth backdrop. “Dancing In The Dark” is a song that has been covered a lot. You have to give it to Shauf for really doing something surprising with it.

Thanks to aswiec for the tip!