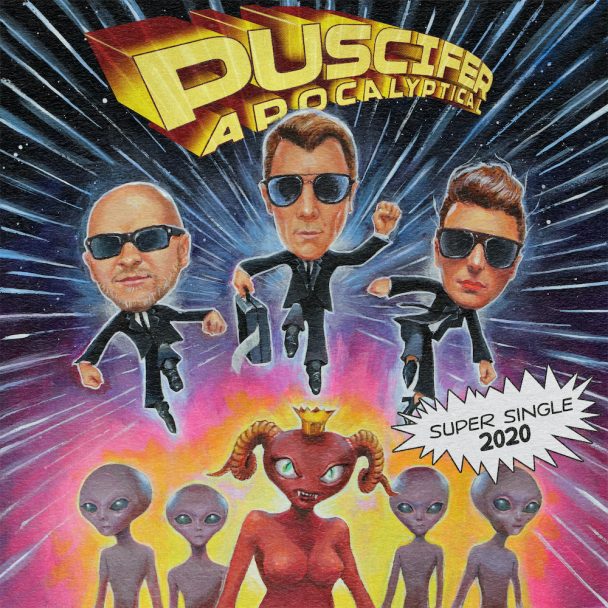 Last year, after making everyone wait for about six eternities, Tool finally came back with the triumphant album Fear Inoculum. This year, they were touring behind it. That’s obviously stopped. (Fans at a tool show in New Zealand in early March may have been exposed to coronavirus.) So now frontman Maynard James Keenan has turned his attention elsewhere. Keenan’s Puscifer project has a new single called “Apocalyptical” out in the world, and they’re promising a new album, the follow-up to 2015’s Money Shot, coming this fall.

“Apocalyptical” is a tense, shivery synth-rocker that just sort of eats away at you over five and a half minutes. Over chilly bleeps and barely-there guitar, Keenan sings at the very top of his register, sharing vocals with bandmate Carina Round. The two of them deliver timely lyrics about watching the world end in front of you: “Go on, moron, ignore the evidence/ skid in to armageddon/ Tango apocalyptical.”

On Apple Music today, Keenan told Zane Lowe that he finished writing “Apocalyptical” back in September, so it’s not specifically about the situation we’re all facing. But the song’s video, which Puscifer co-directed the the animator Meats Meier, is explicitly pandemic-themed. Someone skateboards through empty Los Angeles streets, driven by a need that we only find out at the end of the clip. Keenan and Round wear suits and lipstick and plastered-on hair, like they’re the girls in the “Addicted To Love” video. CGI germs float across the screen. It’s pretty anxiety-inducing! Check it out below.

“Apocalyptical” is out now on streaming services. In the YouTube info for the video, Puscifer promise a new album coming this fall.