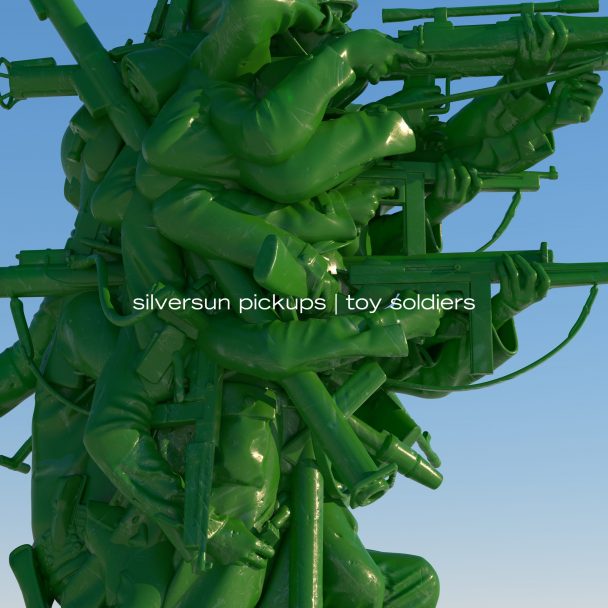 Silversun Pickups released their fifth studio album, Widow’s Weeds, a little over a year ago. Today, the Los Angeles rockers are back with a cover of Martika’s 1989 hit “Toy Soldiers,” recorded in January and produced by Butch Vig. “We were thinking about songs from the ’80s that we loved growing up, that had a big radio moment and was part of our cultural DNA,” the band’s Brian Aubert explans. “A song that you know right away when you hear it. We thought of ‘Toy Soldiers’ as a great example of this and decided we should try and record it.” He continues:

This version doesn’t feel bombastic and over the top, it’s crackling and tiny at times. Butch really helped with this. I dont think I’ve ever sung this intimately before. The guitar solo during it was very important to me, and we quickly realized that the solo worked during that time period, but not when we did it. We threw in a curve ball, some weird things, inspired by Johnny Greenwood. We put our weird stamp on it and it really came together.

There’s something about this song that hits me emotionally — this song has always hit me that way. At first, it wasn’t about the lyrics, but the feel of it. To be honest, I was not initially aware what the song was about, but listening to the lyrics, it was clearly about addiction. Someone else’s addiction. It’s pretty painful and very personal. You realize it doesn’t matter what the shell is, what the production is, what the era is …. this is obviously a very personal story that at first I wasn’t sure we could touch. We ended up framing it into our own world and we think it works.

“I was psyched when SSPU asked me to produce a cover of Martika’s ‘Toy Soldiers,’” Butch Vig adds. “It’s great pop song and I have always had a soft spot for it. I read Martika wrote the song about a friend battling addiction, so knowing what Brian has gone through the song seems even more potent. We put our own spin on it. I hope Martika digs it!”

Silversun Pickups’ rendition of the song comes with a new music video directed by Claire Marie Vogel and Aaron Hymes, with animation by Hymes. “Creating a video from a distance makes for many limitations, but I love how limitations can shape an idea,” Vogel says. “The song’s melancholy nature and the sense of isolation permeating the world right now were both very influential when writing the treatment. The video we made speaks to that collective sense of yearning and disconnection many of us are experiencing.”

“The overall tone and feeling of isolation in the video is a pretty clear reflection of how we were feeling while making it,” Hymes adds. “In a way, it was really therapeutic to take those feelings and put them on screen.” Watch and listen below.