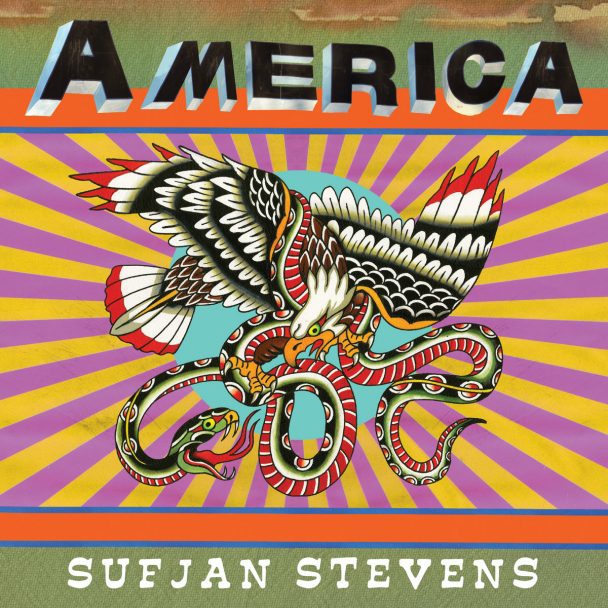 Sufjan Stevens may never have been serious about making an album for all 50 states, but the man still has thoughts on the Union. He just released a new song called “America,” the 12-minute closing track from his upcoming album.

Sufjan announced The Ascension earlier this week. Although the guy always stays busy with projects like this year’s new age instrumental album Aporia, ballet scores like The Decalogue, and the occasional one-off release, this will be his first proper LP since 2015’s Carrie & Lowell. Factors like the cover art, song titles, and track lengths suggest it will veer away from that album’s intimate personal reckoning; this one appears to be more of a big-picture epic a la The Age Of Adz or Illinois — which, incidentally, turns 15 years old tomorrow, the same day the United States turns 244.

Which reminds me: “America” is out now! Sufjan calls it “a protest song against the sickness of American culture in particular.” He adds that The Ascension as a whole is “a call for personal transformation and a refusal to play along with the systems around us.” On a soft electronic canvas that builds slowly to intense peaks, highlighted by the refrain, “Don’t do to me what you did to America!” Early on, Sufjan sighs, “I have loved you/ I have grieved/ I’m ashamed to admit I no longer believe.”

Especially given his series of outspoken comments around the time of Donald Trump’s inauguration, you’d think the sentiments expressed in “America” would be a natural outgrowth of this past half-decade’s political dystopia. But in a statement accompanying the release, he explains that both this song and its non-album B-side “My Rajneesh” actually date back to the Carrie & Lowell sessions:

I was dumbfounded by the song when I first wrote it. Because it felt vaguely mean-spirited and miles away from everything else on Carrie & Lowell. So I shelved it. But when I dug up the demo a few years later I was shocked by its prescience. I could no longer dismiss it as angry and glib. The song was clearly articulating something prophetic and true, even if I hadn’t been able to identify it at the time. That’s when I saw a clear path toward what I had to do next.

The Ascension is out 9/25 on Ashthmatic Kitty. Pre-order it here. The “America” b/w “My Rajneesh” single is out 7/31, but the physical run is already sold out.