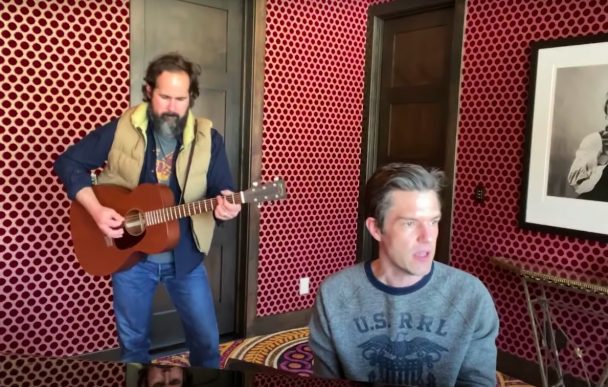 Back in March, around the same time that the pandemic ground American life to a halt, the Killers announced the forthcoming release of their album Imploding The Mirage. They also dropped “Caution,” an extremely tasty lead single that features guitar from Lindsey Buckingham. In the past two months, the Killers have been put in the unenviable position of promoting an album that no longer has a release date, when they can’t actually leave their houses. They’re making the best of it.

Killers frontman Brandon Flowers and drummer Ronnie Vannucci are quarantining together at Flowers’ Las Vegas home, and they’ve appeared remotely on a few TV shows, playing their songs. They’ve already performed “Caution” on one of those shows, playing it in Flowers’ bathroom for Jimmy Kimmel Live. Last night, the Killers — or Flowers and Vannucci, anyway — were musical guests on The Tonight Show, and they once again played “Caution,” this time in some kind of sitting room with a black-and-white Johnny Cash poster and some cool pink-and-black wallpaper.

After a whole bit from an extremely tired-looking Jimmy Fallon about whether the Las Vegas Mirage casino had, in fact, been imploded, Ronnie Vannucci dedicated the song to health-care workers. Flowers played keyboard and piano and sang. Vannucci played acoustic guitar. There was a pre-recorded drum track in there, too — possibly a synth preset. “Caution” is a grand and sweeping and big-budget rock song, but we’re now hearing it in the most bare-bones setups possible, and it still goes hard. Flowers really reaches for his upper register and hits some notes. Also, he’s let his grey hair grow in, and he looks good as hell. He should keep it like that. Watch the performance below.

Imploding The Mirage was supposed to come out 5/29, but its release date has been thrown into flux.