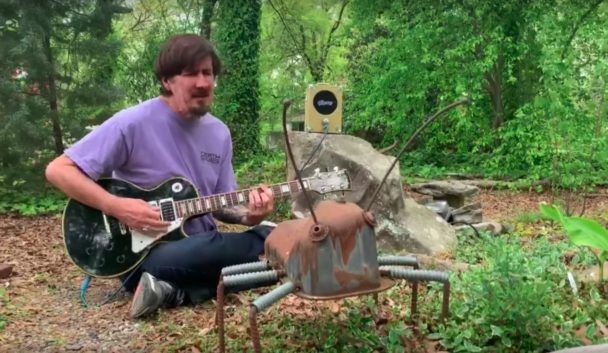 “There’s going to be a new Mountain Goats tape. You might want to watch this space on Friday.” That’s all you had to know, right? That’s what John Darneille has just promised, through song. By “this space,” he means the Mountain Goats’ YouTube page, which has seen a whole lot of activity on recent days. In quarantine, Darnielle has been getting back to the Mountain Goats’ roots, the early days when the band was just one guy with an acoustic guitar yelling at a boombox. Over the past few days, Darnielle has hinted at the possibility of a new Mountain Goats tape, and he has posted video of himself playing (and recording) the new songs “For The Snakes,” “Exegetic Chains,” and “Until Olympius Returns.” And now Darnielle has written a song confirming the existence of this new tape.

Yesterday, Darnielle posted another video of himself playing a new song. This time, Darnielle isn’t hunched over his old Panasonic boombox. Instead, he’s sitting crosslegged in the woods, near a rusty metal sculpture of a bug, playing electric guitar. This, according to the YouTube description, is the title of the song: “The Proliferation Of Marvel Universe Timelines Has Made It Impossible For Me To Use Search Engines To Determine Which Issue From The 70s Had Loki Predicting The Immanence of Ragnarok In Its Final Panel But It Certainly Wasn’t #272, Or, New Mountain Goats Tape Song.” (The Mighty Thor #272, published in June of 1978, is a Roy Thomas/John Buscema joint where Thor tells a bunch of kids about the time Utgard beat him in a series of Asgardian contests — at least according to the search engine that I just used. I don’t know which one has Loki predicting the immanence of Ragnarok in the last panel.)

From all available evidence, John Darnielle wrote this 57-second song simply to let us know that there’s a new Mountain Goats tape and that it will presumably drop on Friday. Presumably, Darnielle will not include this song on the tape. Presumably, he will never play it again. It slaps anyway. Check it out below.

There’s going to be a new Mountain Goats tape. You might want to watch this space on Friday.