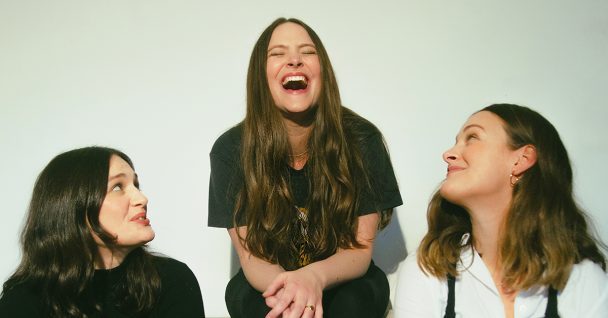 It’s been a while since we’ve heard from the great folk trio the Staves. In 2017, they released a collaborative album with yMusic; in 2018 they offered a Christmas song. But you’d have to go all the way back to 2015 and the group’s beloved album If I Was — one of the best that year — for the last full-fledged Staves collection. Maybe, finally, that’s about to change.

Today, the Stavely-Taylor sisters have returned with a new song called “Nazareth.” Here’s what they had to say about it:

We recorded “Nazareth” in one take on a field recorder sat outside the studio in the summer of 2018. The sun was shining and the birds were singing. We tried recording it in the studio but just kept coming back to this version. It seemed to have the magic.

The song was intended to be in the spirit of an Irish blessing or a kind of a prayer, asking to be kept safe — but it pretty quickly became a more personal and introspective lyric. Moments of glory quickly faded. Worrying, trying. How we mean everything and nothing at the same time. To everyone, to noone.

A press release from their label, Nonesuch, hints that this could be the beginning of a new Staves chapter, with a reference to them putting the “finishing touches” on more music. For now, check out “Nazareth” below.

“Nazareth” is out now on Nonesuch.