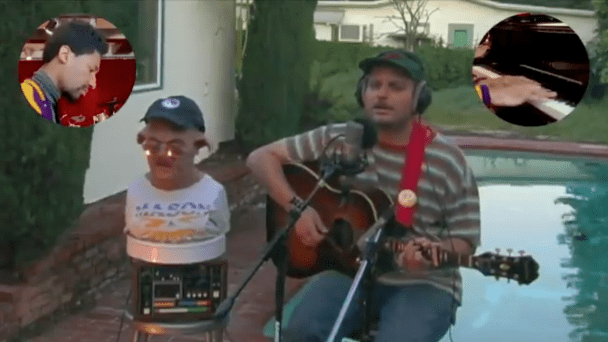 Mac DeMarco has carved out quite the career for himself, hasn’t he? One of the secrets of his enduring success is his knack for balladry. Though DeMarco was once known for his tongue-wagging stage exploits and will always be a bit of a class clown, he’s a low-key master of melancholy drift. Today he has provided us with another example.

In a performance that debuted on The Late Show’s social accounts, DeMarco sat poolside next to a rotating ghoul head and debuted “Fooled By Love,” a slow and downcast song about the fear of being burned by falling too hard too fast. Stephen Colbert’s bandleader Jon Batiste accompanied DeMarco remotely, contributing a piano solo that feels like it was beamed in not just from thousands of miles away but a different world entirely. It’s a fascinating sound for DeMarco.

Check out the performance below.

Mac DeMarco gives a poolside performance of “Fooled By Love” with the help of @JonBatiste! #PlayAtHome pic.twitter.com/ThUVE6cuK0