Last year, Pearl Jam bassist Jeff Ament released a rapid-fire, five songs in seven minutes EP last summer in a flurry of creative energy that overtook him after Pearl Jam’s Gigaton tour was pushed due to the pandemic. He told us at the time that he was working on a lot of music back then, in particular, that five songs on American Death Squad were written in the first week of quarantine when Ament says he got into “Bob Pollard mode” and just cranked out tunes. It turns out he wasn’t kidding.

Ament is set to release the soon-to-be post-COVID appropriate I Should Be Outside, his fourth proper solo, album on August 10. In a lengthy statement shared through Pearl Jam’s Ten Club newsletter, Ament explained the origins of the album. You can see that letter in full below. 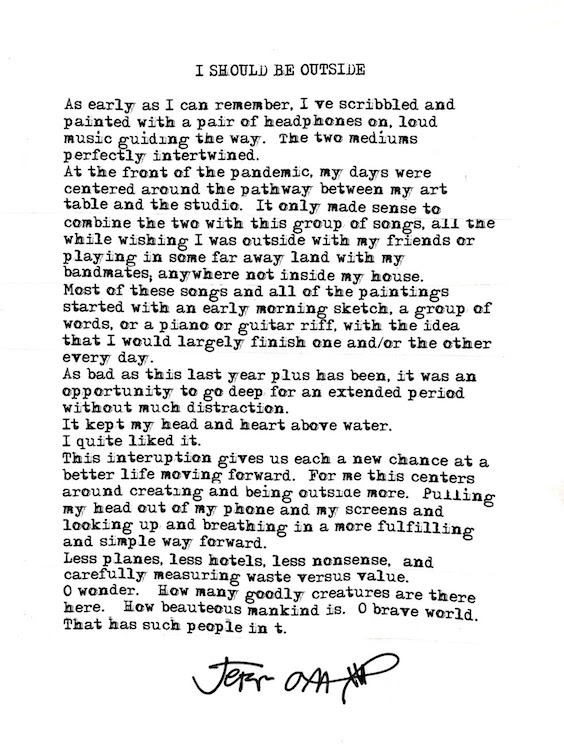 As for his day job, Pearl Jam will be playing a pair of festival dates in September: first at Danny Clinch’s Sea.Hear.Now. in Asbury Park, New Jersey on Sept. 18, and then on Sept. 26 at bandmate Eddie Vedder’s Ohana Festival in Dana Point, California.

You can pre-order the vinyl for the first two songs from that album, “I Hear Ya” and “Bandwidth,” here.

Even in the face of anti-vax protesters who were upset that they couldn’t get into the show, Foo Fighters performed a rollicking 23-song set — including the proper live debut of Medicine at Midnight songs — at the Canyon Club in the Los Angeles suburbs on Tuesday night. The show took place on the first day […]

Over the past few years, the surviving members of Soundgarden and Chris Cornell’s estate have been embroiled in a number of legal issues. On Tuesday, the two parties agreed to settle the issue surrounding the band’s social media accounts and control of the Soundgarden website. “Soundgarden and Vicky Cornell, the personal representative of the Estate […]

As Nevermind approaches its 30th anniversary, Dave Grohl looks back to when the now-iconic LP came out, admitting that Nirvana had fairly low expectations for the album’s success. They certainly didn’t expect it to become one of the most seminal albums in rock and roll history. In an interview with Uncut, friends, family, and fellow musicians […]