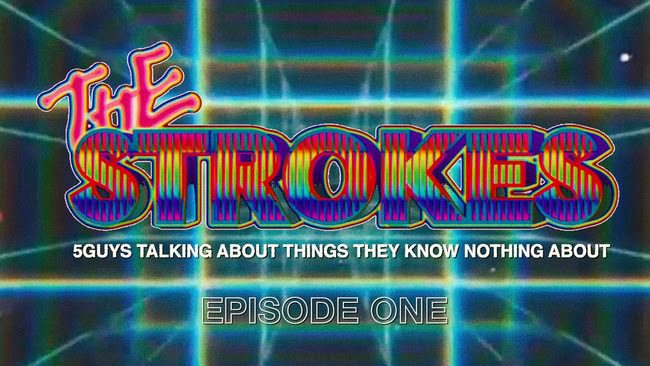 Say this much about The Strokes: they’re all about going against conventional wisdom.

At a time when many of their peers are postponing their album releases, The Strokes aren’t just forging ahead, they’re going into full blitz mode.

On Wednesday evening, the quintet dropped the first episode of what they’re calling a pirate radio series (it may just be in the spirit of that since pirate radio probably doesn’t exist anymore, but perhaps a podcast?). Either way, the series (what the extremely snazzy “Roundball Rock” intro), titled Five Guys Talking About Things They Know Nothing About, saw the band ruminate about various things.

In a Zoom call, the group ruminated about various things, including 2017’s Meet Me in the Bathroom oral history of the New York City scene from 2001-2011 that they were prominent members of and showing an episode of Soul Train in honor of Bill Withers’ death. They also talked about how they didn’t have footage of performing “Walk on the Wild Side” with Lou Reed and how Eddie Vedder performed with them as well.

Like many out there we are staying pretty much at home and keeping to ourselves. We wanted to see if we could connect with folks, and turned what was supposed to be a pirate radio thing for our album release (which we would make in-person) into a video chat instead… “5 guys talking about things they know nothing about.” In light of everything that’s been happening, we hope this distracts you during your quarantine…

The Strokes’ The New Abnormal is out on April 10.

You can watch the full 17-minute clip below: