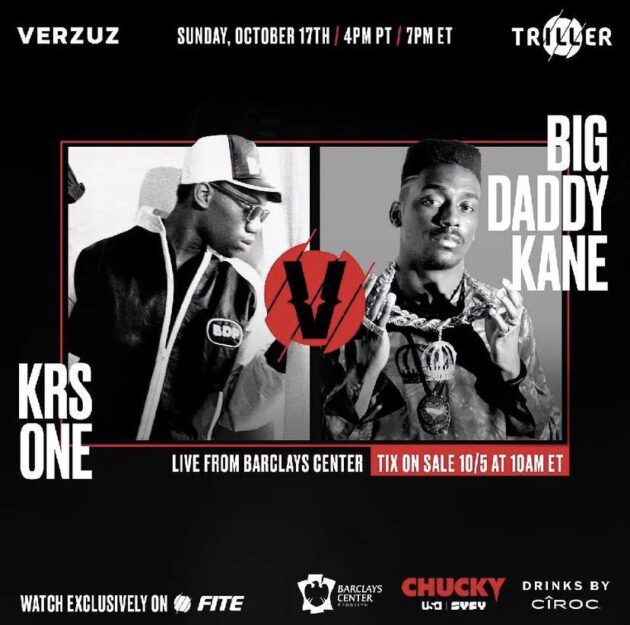 Verzuz takes it back to the old school with KRS-One and Big Daddy Kane.

Taken place at the Barclays Center in the heart of Brooklyn, New York, The Blastmaster from the Bronx went head-to-head with BK’s King Asiatic Nobody’s Equal with DJ Scratch and Kid Capri on the ones and twos.

The two hip hop pioneers ran through their timeless catalog of classics including “MCs Act Like They Don’t Know”, “Young Gifted & Black”, “Black Cop”, “Smooth Operator”, “South Bronx”, “Ain’t No Half Steppin”, “Step In The World”, “The Wrath Of Kane”, and more.

In the midst of the performance, the two blessed the arena with off-the-top freestyles, a solo set from Scratch and Capri on their turntables, and a B-Boy battle.

Guests throughout the evening included Nice & Smooth (“Pimpin’ Ain’t Easy”, “DWYCK”), Mad Lion (“Shoot To Kill”, “Take It Easy”), Das EFX (“Represent The Real Hip Hop”), “They Want EFX”), and Rock Steady Crew’s Crazy Legs. Masta Ace and Craig G joined KRS for “The Symphony”, Buckshot ran through “How Many MCs”, while Channel Live’s Hakeem joined KRS for “Mad Izm”. The Juice Crew and the Boogie Down Productions’ epic rivalry was revisited when Roxanne Shante was brought out by Kane for a freestyle in response to KRS-One’s “The Bridge Is Over”.