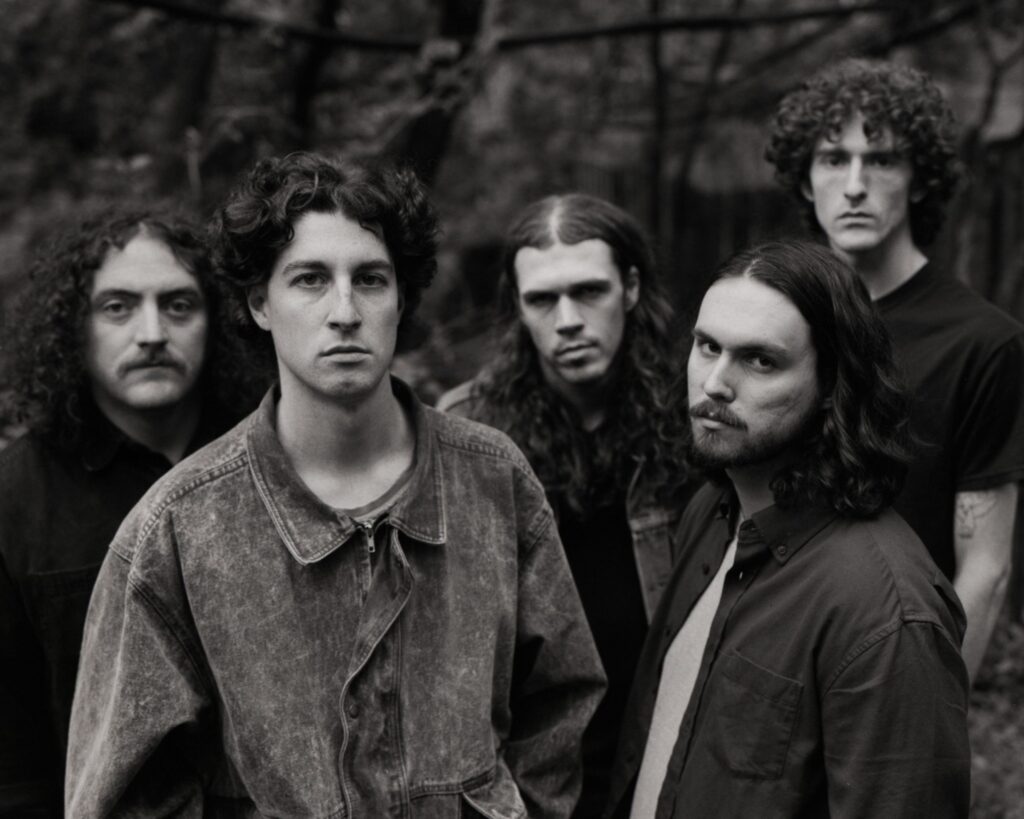 From the first moment Americans started to get even the slightest governmental relief during the pandemic, right-wing psychopaths warned us about people like TJ Strohmer. The Knifeplay frontman lost his job “throwing pizzas” and realized he was actually better off on newly, and unexpectedly, generous unemployment benefits. “I ended up making more money not working,” he jokes. Strohmer used his time on the dole to complete a B-sides addendum to Knifeplay’s 2019 debut Pearlty and write the majority of the songs that ended up on their stunning sophomore LP Animal Drowning. In fact, its first single “Promise” pays tribute to an icon of charismatically exploiting capitalism’s loopholes and hypocrisies to avoid the 9-5 grind.

The song’s hook – “You’re born to this shit and you are what you are” – is a quote from Tony Soprano, a staunch determinist when it comes to justifying, say, the temptation to murder a civilian. His therapist, Dr. Melfi, is less convinced. She reminds him that, as an American, he’s blessed with more options than anyone in history up to this point. Tony mockingly mimics her in response – “Right…America” – which more or less sums up the politics of Animal Drowning, a dream-pop album of sleepless nights and waking nightmares in a broken nation.

Though Strohmer does express a little regret about tying Knifeplay to a specific piece of pop culture, the reception to “Promise” confirms it as the most powerful confluence of The Sopranos and shoegaze since Michael Imperioli’s band. “He played here a couple of weeks ago!” bassist Alex Stackhouse chimes in, while Strohmer retracts his prior antagonism towards being associated with Christopher Moltisanti – as the band recalls a recent ZOPA show at Johnny Brenda’s, Strohmer asks, “I wonder if he saw us.”

All six members of Knifeplay are crammed into a living room during our conversation, taking turns reflecting on the early 2010 scene that drew them from Utah, Michigan, Maryland and the Philly suburbs to the city proper: “a lot of emo music and Alex G, when he was still a local guy.” Yet Knifeplay don’t seem to harbor the nostalgia I’m accustomed to hearing whenever people talk about this era. “There’s a lot of bad music that came out of it,” Strohmer offers, to the band’s agreement and amusement. But even with the great bands, most of them recall that the music often served as a “background for people getting fucked up.” “Back then, there were 200 people at a show but no one would watch the band,” guitarist John Klein recalls. “There’s 100 now and everyone likes the music.”

As to be expected from a half-dozen people who’ve been knocking about the Philly DIY periphery for a decade, there’s a lot of inside baseball – one of Strohmer’s coworkers opened the ZOPA gig, but not the previous coworker who runs the local Born Losers label and connected the band with Jeff Ziegler, the Animal Drowning producer who burnished his local rep working with The War On Drugs and A Sunny Day In Glasgow. Every member of Knifeplay makes solo records, and both Klein and Stackhouse played in a short-lived band with the person who inspired their latest single, “Ryan Song,” out today with a video by Ben Turok.

Not everyone in Knifeplay was completely on board with “Ryan Song” from the beginning — perhaps it was too vulnerable and too specific, its haunting, nearly solo piano arrangement too distant from the murky, discordant shoegaze they’d been making up to this point. For Strohmer, these are the exact reasons it needed to be the final single from Animal Drowning: “I can’t wait to put that song out because I do want to break away from people calling us a shoegaze band.”

Most of Animal Drowning was written prior to the pandemic, and they’re already considering an outline for Knifeplay LP3, which Strohmer hopes will be more akin to “Ryan Song.” Though Siamese Dream and Loveless were respectively referenced for the guitar and bass tones throughout Animal Drowning, Strohmer notes, “The stuff I listen to the most now is stripped-down, hard-hitting lyrics and minimal music.” They’ve already taken steps towards this particular mode, most notably on “Bleed,” which contrasts “Ryan Song” with a much less flattering portrayal of a past friend: “Bleed your narcissistic wound/ Drown in the eternal pool/ Die your ironic death…but you want a hug.”

Strohmer is working through his ambivalence towards writing with direct judgment, especially in a tight-knit scene where he runs the risk of having the subject so easily identify themselves. “If it becomes a great song and it’s actually tasteful and not just dumping emotions, the majority of the time, the person won’t take offense,” Strohmer surmises. “And if they did, then…I still think it’s worth it, honestly.” Or, as Stackhouse puts it, “If it’s good enough, it takes precedence over their feelings.”

Strohmer is also trying to create distance from the “modern emo” adjacent to Knifeplay in their earlier days; their first release No Funeral was a reference to a popular The Simpsons meme. Whereas Strohmer felt that his past attempts to write referential lyrics in the past felt regressive, he’s proud of “Ryan Song” for finding a way to address his relationships honestly and empathically. “I was writing from a perspective of thinking about who he was instead of writing about my sad feelings.”

Mind you, there are still plenty of sad feelings throughout Animal Drowning, though the vocals are often one texture amongst many. The band wants to stress that Animal Drowning really did take three years to complete, though Strohmer recalls that much of it was spent in post-production, leaning over Ziegler’s shoulder trying to find the technical language to express his sonic ambitions on a second-by-second basis. Animal Drowning is by turns grandiose (the opening “Nobody”), utterly desolate (eight-and-a-half minute peak “Untitled”) and bleakly beautiful (just about everything else), often turning on granular, almost imperceptible shifts in tone and arrangement, or the weaving in of atypical instrumentation like slide guitar, 12-string acoustics and the broken saxophone that brings “Promise” to its screeching crescendo.

Strohmer’s description of “Promise” provides a crucial sense of place to Animal Drowning. More so than The Sopranos, “Promise” was influenced by the landscape of his youth in rural, southern Maryland – an area that’s “pretty and financially well-off” but nonetheless wracked by the same deaths of despair most often attributed to the more economically depressed areas of the Rust Belt. “It’s the type of place where they’re putting you on a conveyer belt for becoming a worker and a lot of people our age don’t know how to deal with the fact that we’re being told that’s what life is,” Strohmer explains. “That’s why these areas have such a bleak drug problem with young people because people don’t want to do this boring shit that the system requires bodies to do.”

He doesn’t harbor any illusions about being able to support himself strictly off the band just yet, but then again, he sees the alternative as even less sustainable. “I’ve tried to fight it many times in my life, I went to college and stuff and I was trying to go on this practical path,” he states, having only now experienced the epiphany that everyone does have an option to decide what it is they were truly born into. “I have no idea what my financial future is, but I’m always going to be writing songs or expressing myself in this way. It always comes back — it feels like it’s not a choice.”

Animal Drowning is out 10/19 on Topshelf.