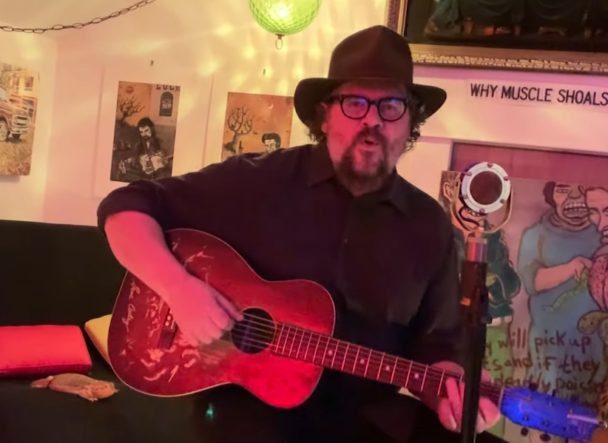 Earlier this year, the long-running institution Drive-By Truckers returned with their latest album, The Unraveling. With much of their work typically being conceptual in nature, it was an album that was born from the tumultuous political times of recent years. And that was, you know, before everything else that’s happened this year. Drive-By Truckers were supposed to be on the road touring behind The Unraveling, but naturally that is not the case. So now they’ve joined the host of artists trying to make the best of the situation, and have given us a rather timely new song.

It’s called “Quarantine Together.” Patterson Hood wrote it during the first week of all this, and it has plenty of lyrical references to our current situation. “We might as well quarantine together/ Because we’d be miserable all alone,” Hood sings. But rather than a kind of coronavirus-era PSA, it seems like a tongue-in-cheek would-be relationship song, with Hood adding thoughts like: “So if you come on over to my place/ I promise you I will stay/ Six feet away.” Musically, it’s got a lived-in, easygoing ramble that fits right into the Truckers’ wheelhouse.

“Quarantine Together” is one of many special releases tied to Bandcamp waiving its revenue shares again today; DBT are offering a couple things through their own page there to try to support the band and crew during this. The song also comes with a homemade video featuring the different members of the band solo at their houses, playing the song. And much like your Zoom calls for work, children and pets make some cameos. Check it out below.

In addition, Hood announced that he and Mike Cooley would both be doing some livestream performances. Hood’s is on Wednesday 5/6 at 6PM PT/9PM ET, and Cooley’s is on Friday 5/8 at 5PM PT/8PM ET. Tickets for each are available here and here.