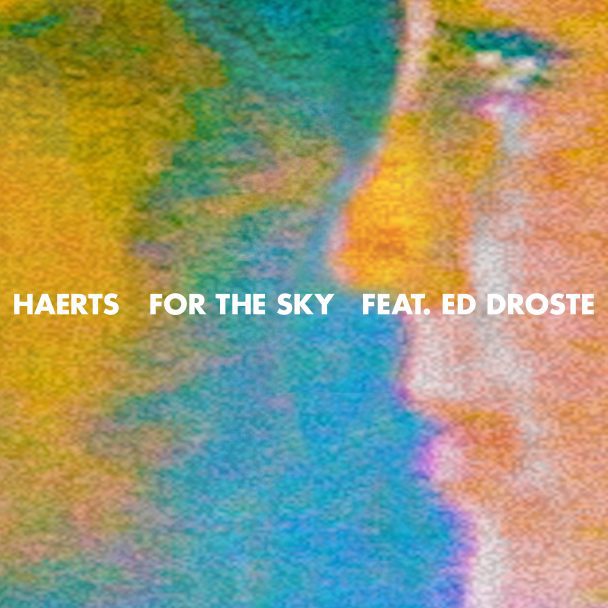 Indie-pop duo HAERTS, who now split their time between New York and Berlin, have returned with a new single feature Grizzly Bear frontman Ed Droste. Which makes sense, because it starts out sounding kind of like that band’s Shields track “Gun-Shy.” As HAERTS’ Nini Fabi explains:

“For The Sky” came from a dream I had when I first found out that I was pregnant, which was the catalyst and beginning of writing the new music. When we finished the demo for the song I kept hearing Ed’s voice and just thought he would sound amazing on it. We didn’t know him at the time, but were such fans. When we reached out we honestly thought we’d never hear from him. But we did and we went into the studio in LA, and ended up recording it just singing together in a room. Now that feels like such a nostalgic notion. But even then it was special. It was that feeling you get when you sing with somebody and something just clicks. And it’s especially crazy when you sing with a vocal force as Ed. I wish everybody could sing together more and feel that.

The song also has a video directed by HAERTS’ longtime collaborator Julian Klincewicz. “We decided that we wanted to do a music video a week before I ended up giving birth,” Fabi says. “So it all came full circle when Julian came to NY and filmed me dancing at 9 months pregnant.” Klincewicz adds:

I think my process on this video was kind of about pushing through to the next chapter in our collaborative visual language. I think If you look back at POWER/LAND, there’s a sort of directness or rawness in the humanity of it. And then if we look at YOUR LOVE — that rawness sort of transitions into a spiritual softness. I think right now is such a confrontational time — that to deal with some of those same themes it needs to have a bit more of a confrontational visual language… with the harsher more vibrant colors… its shifting from a kind of spiritual language, almost more into just a more energetic language. I think for me that’s the best word to describe it — the video is very much about an energy, a visual translation of the energy of the song. I was also thinking a lot about this idea of a coloring book — creating images that almost felt drawn, or like tracings of drawings. I think we started touching on that with the last album, but i wanted to push that a little further along. The raw footage we started off with was so clean and beautiful untouched, but i also had this urge to see how that footage could be pushed until it becomes something else entirely — until it could almost become its opposite kind of beauty – indirect, abstract, less literal. taking the spirit of it, but translating it into just the energy version of it.

“For The Sky” is out now via Rix Records/The Orchard & Humming Records.