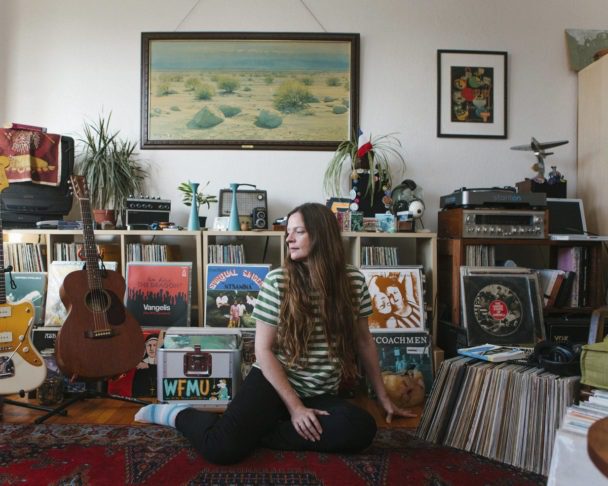 You can always count on Meg Baird to have new music in the works. Baird came to prominence in the aughts as part of the Philadelphia experimental folk group Espers, and upon moving to San Francisco, she drummed and sang for the psych-rock supergroup Heron Oblivion. Along the way she’s filled in the gaps with solo releases and collaborative affairs like 2018’s Ghost Forests alongside Mary Lattimore. Yet like almost everyone else in the music world, Baird’s plans for 2020 have been put on hold due to the global pandemic. A new solo album was scheduled to be mixed this spring, sessions that have now been pushed back indefinitely until American society moves beyond its social distancing era. In the meantime, she is sharing an unfinished mix from the album titled “Cross Bay” with proceeds benefitting a range of charities.

In a note accompanying the song, Baird provides further detail:

The mix dates for my upcoming solo record were among the many, too many cancellations of this unimaginable spring we’re sharing. But I wanted to go ahead and release one of the songs in progress-just case it could help to raise some funds for meals, shelter and support for some of my most vulnerable neighbors.

This song is a mash of abstractions. But one verse was written back in 2016 to thank a friend who checked in on me when I was stuck alone at home, staying up all night watching Lifeboat and freaking out about the Brexit leave vote. I was afraid that it was a terrible sign that the old agreements and already inadequate standards about how we take care of each other each were up for grabs. It really helped to talk about it.

If, understandably, you’d rather see support stay closer to home, or you’re in a better position to help a friend, neighbor, yourself…it would all mean so much. Or maybe you’d just enjoy spacing out on some animation loops I made this weekend using a kid’s stop-motion program, subconsciously inspired by early Sesame Street and created while lying on the living room floor with all the blankets and pillows out.

It’s been a long four years. But I’m thinking of everyone and dreaming of better signs and seeing you soon.”