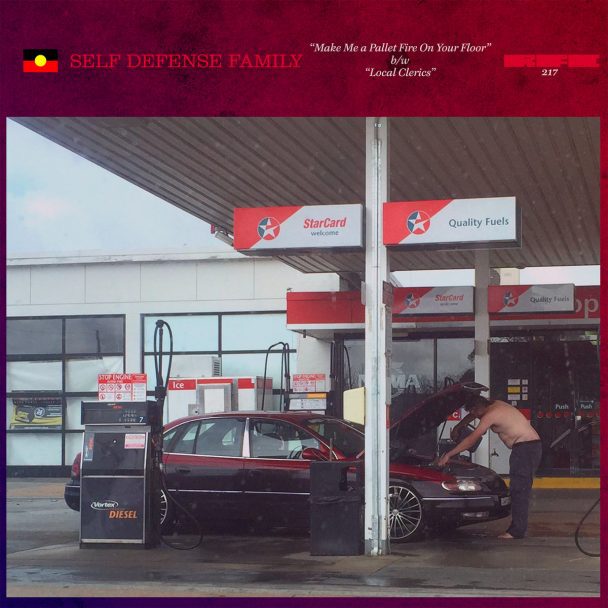 Self Defense Family, the Albany post-hardcore collective led by Patrick Kindlon, have spent the last few weeks digging through their archives to share unreleased music with the world. We’ve heard “Florida Trip” and “Tissue Thin,” “Jesus Of Nazareth,” and “Secular Trust” and “Lust For Nuke.” And today they’re sharing another two songs, “Make Me A Pallet Fire On Your Floor” and “Local Clerics,” the latest installment in their long-running Island series of 7″ singles recorded in places like Jamaica, Iceland, and Scotland. As Kindlon explains in a statement:

Recorded on a tour of Australia a few years back. A fun session with Neil Thomason at Headgap Studios. He was recommended to us on the strength of his old band, Ricaine, but his resume as an engineer is just as impressive.

Our friend Amy Muir (of Fourteen Nights At Sea) blessed us with organ on this one. And that’s former Sydney resident/occasional promoter and now Massachusetts homeowner Jessie Maas at the beginning.

One of our members was left by their partner during the tour and the lyrics to ‘Pallet Fire’ reflect that circumstance. It was nice to sing about someone else’s problems for a change. ‘Local Clerics’ is about as concise and clearheaded as I’ve managed to be on the topic of small minds. I hadn’t revisited the song since the recording but hearing it now I believe it to be among our best.

Make Me A Pallet Fire On Your Floor / Local Clerics is out tomorrow, 5/15 via Run For Cover Records.