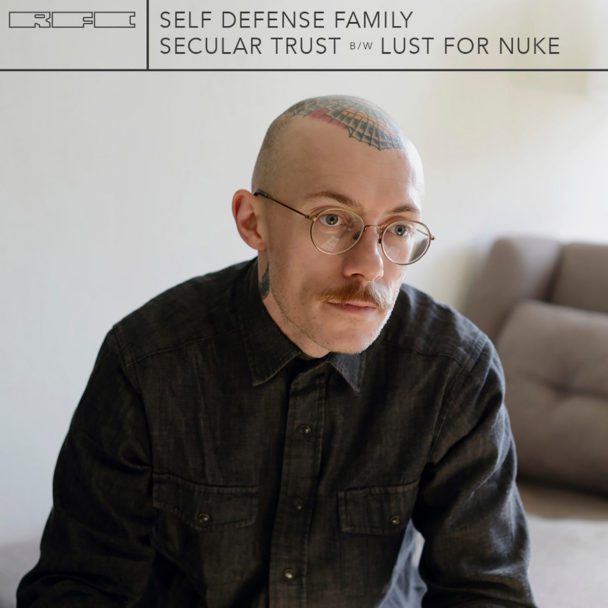 Two weeks ago, the upstate New York post-hardcore collective Self Defense Family dropped a pair of new songs called “Florida Trip” and “Tissue Thin,” which they billed as a two-song EP called Kitten Beach. They followed those up last week with another one-off called “Jesus Of Nazareth.” And now they’ve delivered two more songs together under the name Leeds.

It’s called Leeds because, duh, they recorded it in Leeds. The songs are evocatively titled “Secular Trust” and “Lust For Nuke.” The former is tense and deconstructed, like the sound of anxiety hanging in the air. The latter is more of a slow-moving wave of desolation. Both are pulverizing in their own way. Here’s what frontman Patrick Kindlon writes about it all on Bandcamp:

Being spread across the world, we’ve gotta make the most of whatever time we get together. So a tour is always also an opportunity to record. On this occasion we were touring the UK and it was natural we reach out to Bob Cooper. At this time he happened to be living in Leeds and working from a home studio built by/formerly belonging to Sisters Of Mercy. It was exactly what one would hope for from that experience. Very British. I remember wet stones and moss. We were on tour with Creative Adult and Mike B from the band (and Spiritual Cramp) played on this record. And the groupchat is currently debating if James from Fearing played on it. Matty of Pretty Matty fame definitely played on it. As did Ian of Regional Justice Center. He’s still mad he wasn’t allowed to do more with the drums. Vocals were recorded years later in a practice studio in Southern California. Bob’s notes that came with his mix included “vocal mic seems to have picked up a thrash band in the next room, but think I got it under control.” He did a great job, as did Will Killingsworth on the master. @bobcooperproducer and @dead_air_studios respectively.

The art for this one is our favorite Englishman, @agxpennie. Or Welshman, really. I dunno how sectarian y’all get about these distinctions, so just leave me outta it. This week’s shirt art is courtesy of @black_griffel inspired by a Kreator track.

Hear both new songs below.

Leeds is out now on Run For Cover.