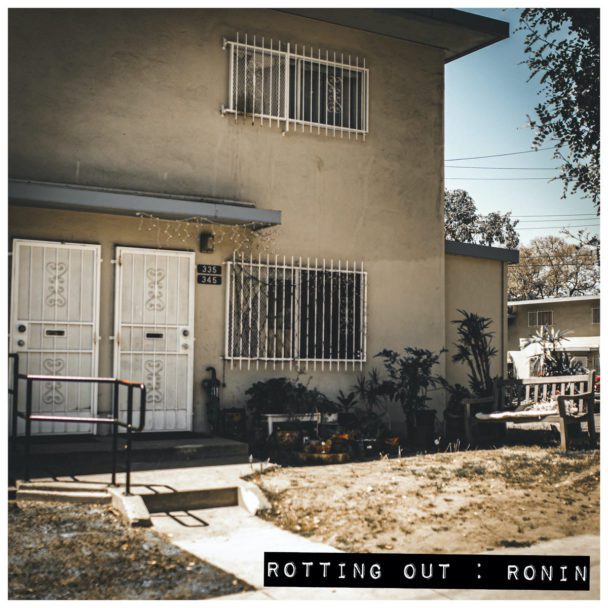 In the seven years since the San Pedro hardcore band Rotting Out last released an album, a whole lot has happened. The band has broken up. Frontman Walter Delgado has been arrested hauling 700 pounds of weed across Ohio. Delgado has spent a year and a half in prison. The band has gotten back together, headlined LA’s Sound & Fury festival, and spent a couple of years ripping up stages on some very high-profile tours within the hardcore world. And now, after all that, they’ve released a new album into a global pandemic, denying the world the chance to scream along with these songs in crowded and sweaty rooms, as the hardcore gods intended. One day.

The no-live-shows situation sucks, but it doesn’t take anything away from Ronin, the new Rotting Out album. Rotting Out play straight-up down-the-middle hardcore — short songs, gang-chant choruses, very little metal influence beyond the occasional blazing guitar solo. Delgado looks like a guys who bench-presses pickup trucks for at least three hours a day, and that is also what you would probably want. On Ronin, Rotting Out capture that song with big-crunch cleanliness that never detracts from the catharsis.

There are some great riffs and hooks and breakdowns on Ronin, but the best thing about it is the hurtling, rabid intensity that Delgado brings. It all builds up to “Boy,” the epic closer where Delgado gets into some extremely real shit about being abused as a child: “‘I’ll hurt your baby brother if you ever speak of this’/ Even if I did, who would believe a homeless kid?” It’s heavy. We’ve posted the early tracks “Stones” and “Unforgiven,” but the whole album is very much worth hearing. Stream it below.

Ronin is out now on Pure Noise Records.