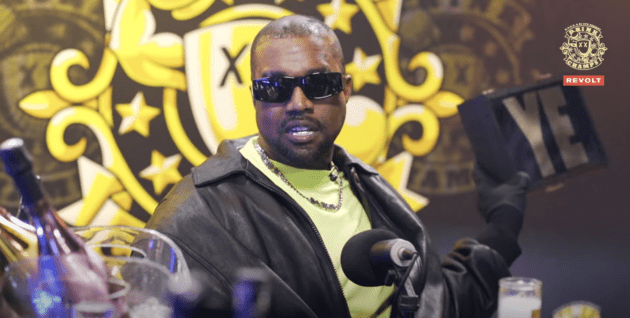 Ye stirs up surprising controversies during his Drink Champs interview.

After much-anticipation, Kanye West made his appearance on the Drink Champs podcast.

During the first two-and-half-hour interview with host N.O.R.E. and DJ EFN, Ye spoke on a wide range of topics from his Donda album to his beefs and everything else in between.

Ye discussed the Donda listening sessions, his work with Marilyn Manson, his continued support of Donald Trump, and praised Soulja Boy while explaining why he took him off the album. Elsewhere, Ye discussed the pandemic, Kobe Bryant, his marriage status, religious beliefs, political views, his GAP line, the VMA debacle with Taylor Swift, his ongoing feud with Drake, and potential contenders (including himself) if he were to do a Verzuz.

However some of the most surprising moments were the comments he made towards his former colleagues. When asked to pick between Pusha T and Big Sean, who recently parted ways with G.O.O.D. Music, Ye responded with “R-I-P. I already decided that when I die, on my tombstone, it’s gonna say, ‘I deserve to be here’ ’cause I signed Big Sean”, before adding “The worst thing I’ve ever done is sign Big Sean.”

He also weighed in on Talib Kweli and his disagreement of his political views. “If I was like you, I’d be where you at. Now, if you take the average 99% of people and ask them, do you want to be Kweli or do you want to be Ye? Most people are going to want to be Ye. So…don’t give me no advice. Go open a book and read yourself to death”.

Since the release of the interview, Big Sean responded to Kanye’s comments on Twitter. “I just got asked to be on the next Drink Champs so I’m assuming Ye talkin crazy.” he said on Twitter. “Was just wit this man, he ain’t say none of that!!! And this was after the interview! I’m dying laughing at you @kanyewest. I can’t wait to go on drink champs now!!!” he added.

Hours later, Just Blaze also addressed Kanye’s claims via Twitter. “None of what was said tonight regarding me fits with any of our history or our previous interactions particularly in light of very recent attempts to work together again,” Just Blaze wrote. “Through recent years he has reached out to collaborate on various projects, including a much rumored collaborative project that he was looking for me to handle a good amount of. It unfortunately never saw the light of day due to reasons unrelated to me.”