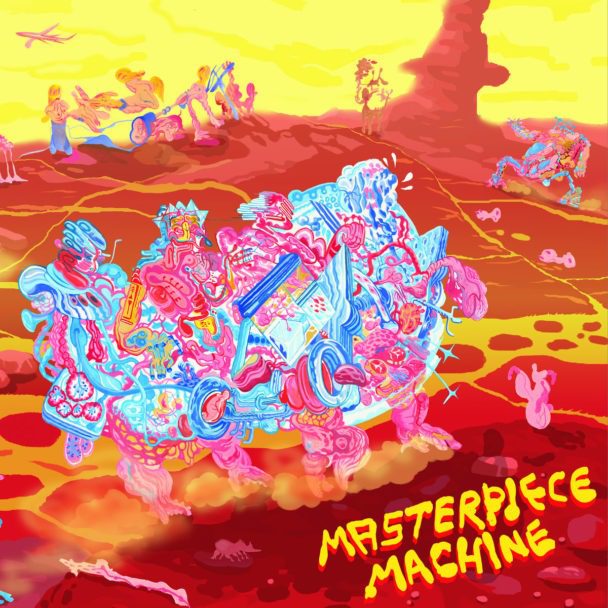 About a year and a half ago, Fucked Up came out with Dose Your Dreams, a wild and off-kilter album that moved the band away from its hardcore roots, into some straight-up disco directions. The two Fucked Up members most responsible for that album’s sound, multi-instrumentalist Mike Haliechuk and drummer Jonah Falco, recently went off and started their own project. Their band Jade Hairpins will release their debut album Harmony Avenue next month, and they dropped their excellent new single “(Don’t Break My) Devotion” a few weeks ago. But now, with that LP looming they’ve also started another new project, and they’ve just shared its first song.

In the new band Masterpiece Machine, Haliechuk and Falco have teamed up with a monster: Riley Gale, frontman for the great Texan thrashers Power Trip. Masterpiece Machine will release “Rotting Fruit” b/w “Letting You In On A Secret,” their debut 12″ single next week. “Rotting Fruit” is up online now, and it sounds nothing like any version of Fucked Up or Power Trip. It’s anthemic, surging dance-rock, a percolating jam that recalls the late-’80s era when industrial music had more to do with dance music than with metal.

Talking to Revolver, Haliechuk says that the two new songs came from the Dose Your Dreams sessions:

We had these two specific songs that sounded huge and aggressive, so we wanted to carve them off into their own project. We sent them to Riley because we felt that his voice would go perfectly over them and he’s someone that we’ve been friends with for years. After we started getting back vocal mixes, it became something that we were all excited enough about to try and turn into a real project, and not just a one-off track.

“Rotting Fruit” goes just ridiculously hard, and you can hear it below.

The “Rotting Fruit” b/w “Letting You In On A Secret” 12″ is out 4/15 on Triple B Records/Quality Control HQ. They say they want to make an album, too, and I really hope they do.