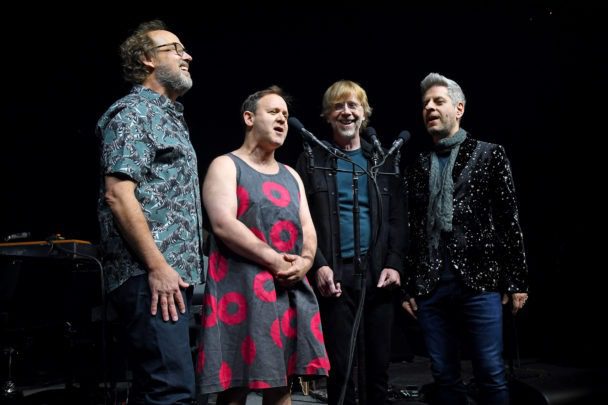 Phish haven’t released a proper studio album since 2016’s Big Boat. Partially that’s because in the world of Phish, studio albums are nearly beside the point. The Phish experience is allegedly predicated on the live experience, and indeed the polarizing jam-band luminaries — who’ve been enjoying a bit of an indie-rock renaissance in recent years thanks to their influence on Vampire Weekend and others — have released a steady stream of official concert bootlegs in the past four years, including a massive 2018 box set documenting their complete Baker’s Dozen shows at Madison Square Garden in the summer of 2017.

But like every other touring musician, Trey Anastasio and company can’t hit the road right now due to the COVID-19 pandemic. It seems like an ideal time to finally release a new studio album, and that’s exactly what’s happening. As Jam Base points out, Phish announced a new LP called Sigma Oasis Tuesday night at the end of their weekly live show replay Dinner And A Movie: An Archival Video Series.

Phish are debuting the new album tonight via a livestream available through their website site, Facebook page, and SiriusXM station. (SiriusXM satellite radio is free through 5/15, by the way.) Keyboardist Page McConnell explained that the band recorded the bulk of Sigma Oasis last November at Anastasio’s mountaintop barn in Vermont and that engineer Vance Powell finished work on the album “just last week.”

No one loves Father Of The Bride more than me, but am I ready to cross the Phish rubicon in earnest? I guess we’ll find out soon. The Sigma Oasis listening party begins tonight (Wednesday, 4/1) at 9PM EDT.