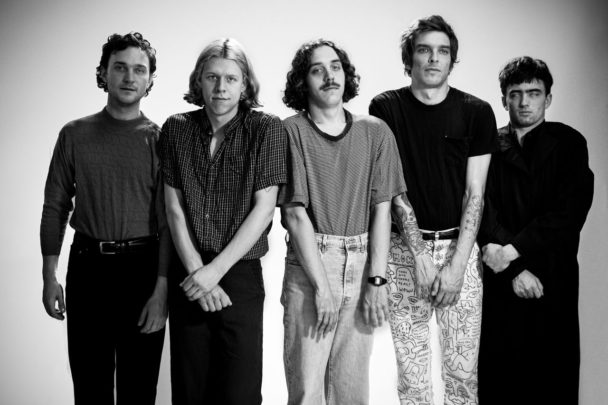 After releasing one of 2019’s best EPs, the Montreal art-rock weirdoes Pottery announced that they’d be following it up this year with their full-length debut Welcome To Bobby’s Motel. So far we’ve heard the multi-part lead single freakout “Texas Drums Parts I & II” — which ranked amongst our favorite songs that week — as well as the jittery, catchy “Take Your Time.” Today, they’re back with another new one.

Pottery’s latest preview of Bobby’s Motel is called “Hot Like Jungle.” It comes with a video featuring animation by the band’s drummer Paul Jacobs, and the song was inspired by his life, too. “This was written as a love song for Paul’s
girlfriend,” the band explained in a statement. “He had a job working construction one summer and came up the lyrics almost as a sort of Springsteen parody, they’re very blue-collar, very working class. When Austin sings it we always picture him on a mountain shouting off into the distance with a girl out there singing back to him.”

Thematically and musically, “Hot Like Jungle” is noticeably different than most of the other Pottery material we’ve heard so far. Fittingly enough for a love song, “Hot Like Jungle” has an easygoing swoon to it, with little synth and guitar sighs that directly evoke a sort of languid summer night romance. Check it out below.

Welcome To Bobby’s Motel is out 6/26 via Partisan/Royal Mountain. Pre-order it here.