Samia – "Is There Something In The Movies?” 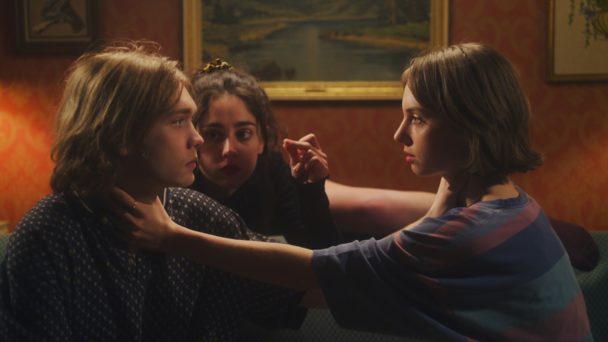 Samia put together a pretty fascinating 2019 that ranged from collaborating with the obscure NYC indie band Active Bird Community to covering Liz Phair to performing at Stereogum’s SXSW party. Now she’s back with a compelling new ballad and a music video starring some of her fellow Hollywood youths.

Samia is the daughter of actors Kathy Najimy and Dan Finnerty (the guy who sang the foul-mouthed “Total Eclipse Of The Heart” cover in Old School), and she’s never been shy about putting her famous friends in her videos. Last year’s “Ode To Artifice” featured family friend Mary-Louise Parker. The clip for her new single “Is There Something In The Movies?” costars Stranger Things and Once Upon A Time In Hollywood’s Maya Hawke, another child of movie stars who recently launched a music career. Also in the video is Charlie Plummer, recently seen in Hulu’s aughts-indie-loving Looking For Alaska.

The song itself is a ballad bemoaning the way Hollywood distorts people’s perception of romance. Samia shared this statement on the song and its video, which she directed with Matthew Hixon:

It’s a song about heartbreak and disenchantment with the entertainment industry. I felt betrayed by someone honoring that fantasy over my love. Glorifying the idea of legacy or life as a means to an end makes me really sad, especially when it comes to people dying young. There’s a line about sleeping with a stuffed pig that Brittany Murphy gave me the day I was born; her death has always felt painfully unnecessary to me and has fueled my resentment towards that whole thing. In the video, Maya and Charlie play “Movies” and I’m just trying to make sense of them.

“Is There Something In The Movies?” is out now on Grand Jury.