Joey Bada$$ “Show Me” On The Tonight Show 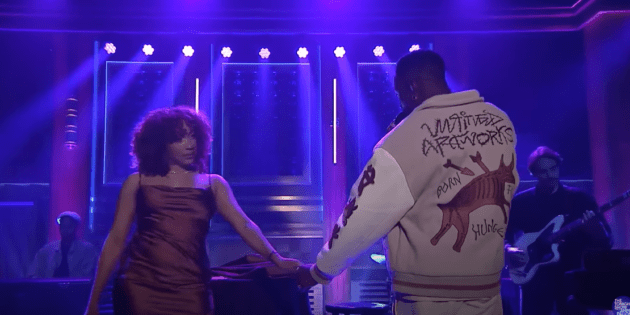 Joey Bada$$ brought the romantic vibes with indie rock Men I Trust for his performance of “Show Me” on The Tonight Show Starring Jimmy Fallon on Wednesday (Nov. 2).

Backed by lead single Emmanuelle Proulx, bassist Jessy Caron, and keyboardist Dragos Chiriac, the Brooklyn rapper recited the song while joined by a woman on stage.

The Statik Selektah and Heavy Mellow-produced track samples the Montreal band’s 2018 single, “Show Me How” and is featured on Joey Bada$$’s latest and standout album, 2000, which features appearances by Diddy, Westside Gunn, Chris Brown, JID, Larry June, and Capella Grey.